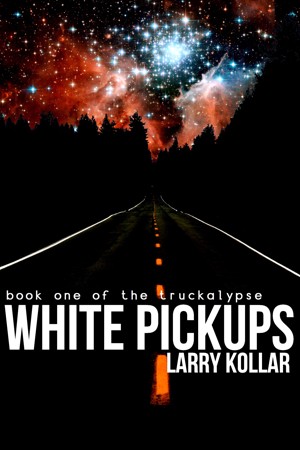 By Larry Kollar
Rated 4.00/5 based on 1 reviews
At summer’s end, mysterious white pickup trucks take to the roads and compel nearly everyone to “drive off.” Some of those who remain gather in a suburban Atlanta subdivision, and struggle to cope with a world whose infrastructure is rapidly crumbling.

Love, hate, survival, and an apocalypse like no other! More
“Legends are about ordinary people who stepped up and did what had to be done.”

At summer’s end, mysterious white pickup trucks take to the roads and compel nearly everyone to “drive off.” Some of those who remain gather in a suburban Atlanta subdivision, and struggle to cope with a world whose infrastructure is rapidly crumbling. One of the few who are mentally and emotionally prepared for the end of the world is Cody Sifko, a youth who quickly becomes the inspiration for the others. When a strange homeless woman names him “Father of Nations,” is she seeing his future or her own delusions? As winter and a hate group try to destroy Laurel Hills, can Cody overcome personal tragedy and seize his destiny?

Love, hate, survival, and an apocalypse like no other—White Pickups is ready to take you on the ride of your life!

Larry Kollar lives in north Georgia, surrounded by kudzu, pines, and in-laws. He writes fantasy, science fiction, and horror, and now leads the #TuesdaySerial project for online serial fiction. You can find news and snippets of his strange fiction at http://www.larrykollar.com/

For Larry's even stranger reality, check out http://farmanor.blogspot.com/

Also in Series: The Truckalypse 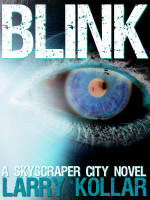 In the beginning Larry introduces us to Tina and her daughter Kelly. It all seems like a normal day as Tina drives home, but as she does, she starts to notice that there are a few White Pickups on the road. Things become stranger when she arrives at work the next day and finds not just her department, but others in the building are missing a large number of staff—absent without leave. On her return home she notices in her suburb more White Pickups not just on the roads but also parked in her neighbours driveways, instead of their usual cars. Soon she is to discover that her own car as well as her daughter’s is replaced with one of these Pickups, and that the White Pickups whisper to them, drawing them closer in an attempt to get them to climb in. People are compelled to get in and drive off, and once they do, are not seen again.

People continue to disappear, unable to resist the whisperings from the trucks. Tina and her daughter manage to withstand their call and find themselves alone, that is, till they meet up with Cody, an unusual character, who is used to being different to those around him and who found ignoring the call of the trucks easier than most. Soon these three are joined by more survivors, Tim and Sara who Tina had met while gathering supplies and later by Tina’s ex Charles and a group of survivors from Charles’s home town.

Larry Kollar has created a diverse and interesting bunch of characters who band together in a time of adversity, as their life as they knew it breaks down around them. He takes us on a journey that allows us to witness their highs and lows as they struggle to survive the constant threat by the White Pickups. Among these characters is a young man called Cody, whose imagination drive and self sufficiency motivates and encourages those who come to know him.

The story has the right mix of love, courage and determination to survive, along with conflict to make it an enjoyable read. What are the White Pickups? Why are they here? I guess you’ll have to read the book to find out.

I am happy to give this book the HelenScribbles thumbs up.

(This review also appears on my blog helen-scribbles.com)

You have subscribed to alerts for Larry Kollar.

You have been added to Larry Kollar's favorite list.

You can also sign-up to receive email notifications whenever Larry Kollar releases a new book.