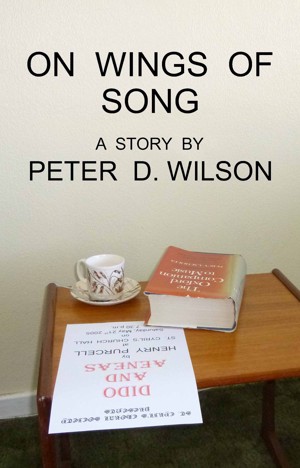 On Wings of Song

By Peter D Wilson
Two choirs, run by former friends now bitter rivals, are compelled to co-operate, leading to involvement with the murder of a Russian businessman and discovery of a mistake as the original cause of the leaders' quarrel. More
The church choirs of St. Cyril's and St. Cyprian's are run by former friends, now bitter rivals since their school days. Forced by a threatened clash of performance dates to co-ordinate arrangements, they are induced to co-operate more closely by an offer of sponsorship from a local business. Their first joint engagement at the home of an émigré Russian oligarch gains not entirely unwelcome publicity from the murder of their host during the evening. A later joint performance, with an orchestra supported by their own sponsor's American counterpart, leads to a discovery ending the quarrel between the two choir leaders.
Download: epub mobi (Kindle) pdf more Online Reader
rtf lrf pdb txt
Price: Free! USD
Add to Library
Create Widget
Tags: reconciliation humour intrigue skulduggery
About Peter D Wilson

Peter Wilson was born in Nottingham, England, in 1936. After education at Nottingham High School, where he changed course from classics to science because he couldn’t get on with Greek, he gained an open scholarship to St. Edmund Hall, Oxford, to be taken up after National Service (1955-57) in which he was a radio mechanic at the SHAPE military headquarters near Paris. At Oxford he gained first-class honours in chemistry, then took a PhD at Leeds University.

In 1964 he was appointed to a research position at the nuclear reprocessing site at Sellafield in Cumberland (the north-western corner of England), then operated by the United Kingdom Atomic Energy Agency (UKAEA) of which the relevant division became British Nuclear Fuels plc (BNFL) in 1971. He remained there until retirement in 2001, mostly working on process chemistry development. For the last dozen years he was chiefly concerned with certain aspects of long-term waste management and related strategic issues, helping to form the company technical policy thereon and presenting its rationale in international discussions. He was also the technical member of a team representing the UK in gaining acceptance of an extension to the Nuclear Non-Proliferation Treaty to cover a possible loophole. His book "The Nuclear Fuel Cycle" (Oxford University Press, 1996) has become the standard text on the subject. Following his retirement, BNFL set up and financed a "Peter Wilson Medal and Prize" for research and communication, to be awarded annually for ten years at Leeds University.

He lived in Seascale, a coastal village near to the Sellafield site. His interest in amateur dramatics dated back to the 1960s and for many years he was an active member of the society based in Gosforth, the next village inland. His collection of stories, plays and film scripts along with some factual material may be found at http://peterwilson-seascale.zohosites.com/.

You have subscribed to alerts for Peter D Wilson.

You have been added to Peter D Wilson's favorite list.

You can also sign-up to receive email notifications whenever Peter D Wilson releases a new book.