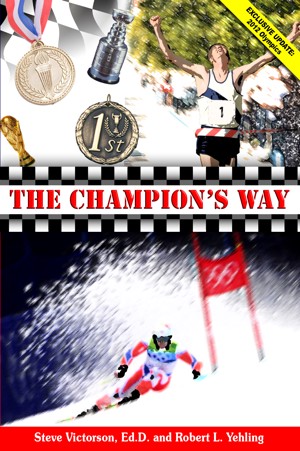 Steve Victorson, EdD. (http://www.stevevictorson.com) has spent his entire adult life at the forefront of the sports fitness and general health and fitness fields. He is the founder and president of Swymfit (http://www.swymfit.com), an innovative water fitness and conditioning center in Boxborough, Mass. He also worked as an exercise physiologist for the Burdenko Water and Sports Therapy Institute just outside Boston, Mass. Dr. Victorson served as a conditioning coach for the U.S. Ski Team during a period that included the 1988 Olympics. In 1999, Dr. Victorson earned his doctoral degree in Human Movement from Boston University. His doctoral dissertation, “The Factors of Winning Among Elite Alpine Ski Racers,” provided the inspiration and impetus for The Champion’s Way. Dr. Victorson hails from Santa Cruz, Calif. He was a collegiate water polo player before moving into the coaching world as a conditioning instructor, and later, going to work with the US Ski Team. He has lived in the Boston area for nearly two decades. Now at work on his next collaborative book with co-author Robert Yehling, Dr. Victorson has blogged about the subjects in The Champion’s Way for the past three years. Please read his blog at http://www.stevevictorson.com/Blog.aspx. --- Co-auothor Robert Yehling (http://www.wordjourneys.com) is the author of nine books, including the 2007 Independent Publishers Award winning Writes of Life. He is a collaborator/ghostwriter on five others, including George Lucas’ Blockbusting. He has won awards for sports reporting, magazine writing and editing, website editing and book writing. A former sportswriter and assistant sports editor for the North (San Diego) County Times, he later represented many national and world champions while owning Horizon Communications, a pioneering PR firm in ocean sports, extreme sports and triathlon promotion. He has also worked with and written about champions in business, the arts, and education. A three-time Boston Marathoner (2005-7-9), Yehling is a successful high school cross-country and track coach. He lives in California. He blogs about The Champion’s Way and other subjects at http://bobyehling.wordpress.com.

You have subscribed to alerts for Steve Victorson.

You have been added to Steve Victorson's favorite list.

You can also sign-up to receive email notifications whenever Steve Victorson releases a new book.