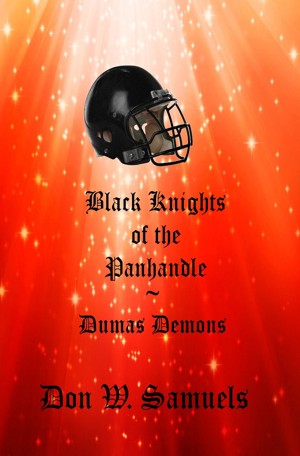 The story provides an historic account of the times and how the entire town came together during the glory days when sports ruled. The powerhouse sports teams broke many schoolboy records as three state championships titles were garnered in two years. The Dumas high school mascot is a Demon, but during the 1961 football season, a sports writer coined the Demons as Black Knights of the Panhandle.

Excitement and feelings of teenagers and citizens are captured in this writing as the Demons succeeded in sports. Hopefully, you will gain an understanding of how the Christian culture provided positive guidance to the community. This era was during a time of simple lifestyles, the birth of rock n roll music, sock hops and innocent teenager romance.

Don Samuels is a former Dumas High School athlete! He played guard on offense and linebacker on defense for the 1961 and 1962 Class AAA State Championship football teams. Don is a member of the graduating Class of 1963.

Don Samuels was born in the 1940’s and lives in Austin, Texas with his wife, Gala and their dogs. As a child, Don lived in the panhandle town of Dumas, Texas and participated in sports. He was a member of two state championship football teams in high school. His memoir, Black Knights of the Panhandle-Dumas Demons is about life as a child in the 1950s and early 1960s. The memoir tells about how the Christian culture provided positive guidance to the community. The era was during the birth of rock n roll music, sock hops and innocent romance among teenagers. Historic information in this writing revives the powerhouse sports teams from Dumas, Texas during the early 1960s.

A career in law enforcement began when Don joined the Texas Department of Public Safety as a highway patrolman. He also held the position of elected Sheriff of Lincoln County, New Mexico. Lincoln County is the same county where Pat Garret was Sheriff and Billy-the-Kid became infamous as an outlaw. Don currently holds professional designation as a Certified Fraud Examiner since 1993. The Association of Certified Fraud Examiners is globally accepted and recognized as the premier professional organization of anti-fraud professionals. With over 30 years experience conducting criminal and civil investigations, he has also carried law enforcement commissions as a Special Officer of the FBI and Deputy US Marshal.

Don has conducted investigations involving various types of fraud as well as crimes of domestic violence, homicide, attempted murder, kidnapping, sexual assault, child abuse, armed robbery, theft and burglary. Many of his investigations have been prosecuted in state and federal courts throughout the USA.

You have subscribed to alerts for Don Samuels.

You have been added to Don Samuels's favorite list.

You can also sign-up to receive email notifications whenever Don Samuels releases a new book.