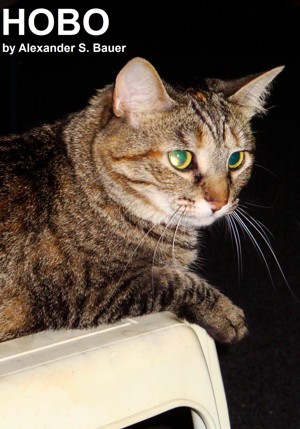 By Alexander S. Bauer
A short fictional account of a rescued kitten based, in bits and pieces, on the stories of the eleven cats my family and I have rescued that were dumped outside our rural home over the past fifteen years.

I was abysmal at the kind of writing that gets you good grades in English classes, so I never wrote much until tenth grade, after my ninth grade teacher embraced my creativity. Since then I haven't been able to stop.

The best way to describe myself would be complex. I lettered in two sports (Bowling and Baseball) in high school and captained two academic clubs (Science Olympiad and Math League. I'm a jock who likes to write, who watches Star Trek, who cares about LGBT issues and human sexuality. I'm a nerd that plays with legos and builds model railroads, but can also play sports. One day I'll read about psychology, then movies, then hockey, then history.

I've written four full novels, a couple dozen short stories and somewhere around five hundred poems. As a writer I derive inspiration from Rowling, Orwell, Crichton, and a number of Star Trek novelists as well as every movie I've ever seen. I like fantasy, things that can't happen in real life, the creation of entire worlds in which both author and reader can immerse themselves. I like ambiguous characters, neither good nor bad. I like insidious heroes, bastards with hearts of gold, people that make you laugh and think at the same time.

And I love to converse, so if you're like me, track me down somewhere and say hi.

You have subscribed to alerts for Alexander S. Bauer.

You have been added to Alexander S. Bauer's favorite list.

You can also sign-up to receive email notifications whenever Alexander S. Bauer releases a new book.