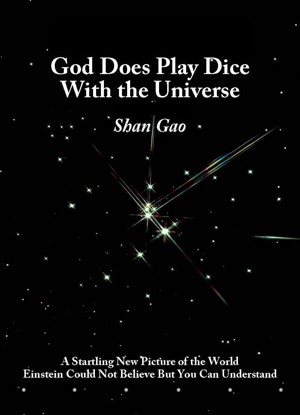 God Does Play Dice with the Universe

By Random Press
In the early morning of 12 October 1993, I experienced a sudden enlightenment. At that moment, I felt that my body permeated the whole universe and I was united with it. A clear picture then appeared: a particle is jumping in a random and discontinuous way. It is not inert but active, moving purely by its own "free will". Maybe Einstein was wrong; God does play dice with the universe. More
Science has made a mighty advance since it originated in ancient Greece more than 2500 years ago. Yet we still live in Plato's cave today; we think everything around us moves continuously, but continuous motion is a mere shadow of the real motion. This book will lead you to the exit of the cave along a logical and comprehensible path. After passing Zeno's arrow, Newton's inertia, Einstein's light, and Schrödinger's cat, you will reach the real quantum world, where every thing in the universe, whether it is an atom or a ball or even a star, ceaselessly jumps in a random and discontinuous way. In a famous metaphor, God does play dice with the universe. The new idea of this book may finally solve the quantum puzzle and lead to a profound shift in our world view.

Its very existence is at any rate, an excellent illustration of the extent to which physical data force us to depart from commonsense ideas when we try to depict reality “as it really is”.
---- Bernard d'Espagnat, theoretical physicist, philosopher of science, Templeton Prize 2009 Laureate

The idea of using discontinuous motion as a realist interpretation of quantum mechanics is original.
---- Reviewer of Foundations of Physics

If it goes through, this would be an original and significant contribution to the debate over the nature of motion.
---- Reviewer of American Philosophical Quarterly

It is a wonderful illumination of the discrete/continuum problem... Everyone should enjoy your concise writing style and, more so, the poetic repeats of what God does or does not do with dice.
---- Joseph Mazur, Professor Emeritus of Mathematics at Marlboro College, PEN Award winning author of Euclid in the Rainforest: Discovering Universal Truth in Mathematics

Shan Gao received his Ph.D. in Philosophy of Physics from University of Sydney in 2013. He is a theoretical physicist and philosopher of physics, whose major interests are foundations of quantum mechanics, philosophy of physics, history of modern physics, and philosophy of mind. His original ideas, including random discontinuous motion, quantum superluminal communication and quantum panpsychism, have been published in professional journals such as International Journal of Theoretical Physics, Foundations of Physics, Minds and Machines, Journal of Consciousness Studies, and so on. He is the author of God Does Play Dice with the Universe, Quantum Physics: From Illusion to Reality, Understanding Quantum Physics: An Advanced Guide for the Perplexed and several other books. His first popular science book Quantum (in Chinese) is very successful, and it has sold more than ten thousands copies in China during the last few years. For more details please visit http://gucas.academia.edu/ShanGao.

You have subscribed to alerts for Random Press.

You have been added to Random Press's favorite list.

You can also sign-up to receive email notifications whenever Random Press releases a new book.