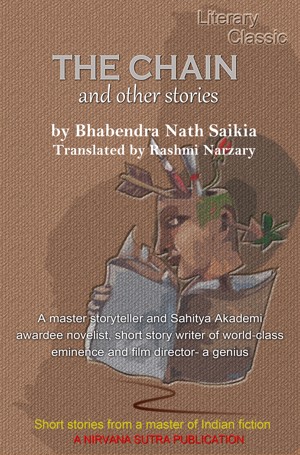 THE CHAIN and Other Stories

It is a collection of 10 stories by Dr Bhabendra Nath Saikia. Many of these stories were included in the collection of short stories for which Dr Saikia was awarded the highest Indian Literary Award, Sahitya Akademi. More
A master of Indian fiction- Short Stories from His Pen

The ebook “The Chain and Other Stories”

It is a collection of 10 stories by Dr Bhabendra Nath Saikia. Many of these stories were included in the collection of short stories for which Dr Saikia was awarded the highest Indian Literary Award, Sahitya Akademi.

An author becomes extravagant when he portrays his soul in the exquisite flow of the ink. He exhibits the emotions and feelings of life so easily that we as readers flow away with their thoughts. One such prolific writer rather an author who holds your hand in the ocean of thoughts and emotions is late Dr. Bhabendra Nath Saikia.

Dr. Saikia was adept at understanding the human mind and its complexities. The characters in his works live through the same hopes and dreams that the common man in the society faces in the struggle for his daily existence; they are haunted by the same nightmares and soothed by the dreams that are real in life; and the values and morals that serve as the guiding light for the characters in his works are the same that guide us in life and stand as challenges when we are at moral crossroads in the journey of life.

He was a novelist, playwright, short story writer, film director- all rolled into one. His films portray the life of the common man, as do his literary works.

Dr. Saikia was awarded the one of the highest civilian awards of India, the Padma Shri, in 2001. The Sahitya Akademi award was presented to Dr Saikia in 1976 for his short story collection Srinkhal (The Chain). This award is a literary honor in India, and it is conferred by the Sahitya Akademi, India’s National Academy of Letters.

About the Translator and Editor

Rashmi Narzary is an author, columnist and freelance editor. She created a niche for her poetry at the International Library of Poetry and the South Asian Women’s Forum- an online platform. Her writings have been regularly published in a number of local, national, global and online magazines and dailies. Ms Narzary has been a creative and short story writer for over a decade. She has written and published three books- Wings, Looking Beyond and His Share of Sky.

“Deeply insightful, immensely enjoyable, and dipped in the rich cultural heritage and traditions of Assam, Dr. Saikia’s works are as universal as they are local.”

“A rare glimpse of Assamese society, portrayed with deep understanding and love by a master craftsman.”

“The story line and character presentation in his books are so enchanting and infused with passion that the readers can hardly take their eyes off it.”

Dr. Bhabendra Nath Saikia (Assamese: ড˚ ভবেন্দ্ৰ নাথ শইকীয়া) was a novelist, short story writer and film director from Assam. He had a PhD in Nuclear Physics from the University of London and later taught at Gauhati University. He won many literary awards, including Sahitya Academy (1976), and was also recognised with the Padma Shri.

He is recognized as one of the top ranking writers of Assam. Many stories have been translated into English, Bengali, Hindi, Telugu, Malayalam, Marathi, Gujarati etc. He had also written a large number of plays for All India Radio (AIR). The plays Kolahal, Durbhiksha and Itihaas were taken up by the AIR as national plays. Kolahal was selected for broadcast from foreign centers. He has been associated actively with the stage as a playwrit and director. He has written many plays for 'Mobile Theatre' of Assam, and a number of One Act Plays.

He had directed eight feature films. These films have been screened at International Film Festivals held at various places such as Cannes, Madras, Hyderabad, New Delhi, Bangalore, Calcutta, Karlovy Vary (Czechoslovakia), Nantes (France), Valladolid (Spain), Algiers (Algeria), Pyong Yong (North Korea), Sydney, Munich, Montreal and Toronto. Has also directed one episode of a Doordarshan series on Rabindra Nath Tagore's stories in Hindi. Seven out of his eight films have been selected for Indian Panorama Section of the International Film Festival of India. • He received the Sahitya Akademi (India) Award in 1976, the Rajat Kamal Award of the Government of India for the film Sandhyarag in 1978, Anirban in 1981,Agnisnan in 1985, Kolahal in 1988, Sarothi in 1992, Abartan in 1994 and for Itihaas in 1996. He was adjudged as one of the "Twenty one Great Assamese Persons of the twentieth century" in a literary weekly news magazines of Assam.

He also worked extensively in the creation, proposal, construction, and planning of the Srimanta Sankardev Kalakshetra in Guwahati, Assam, which is now a sprawling cultural center, one of its kind, and a tourist attraction for the state of Assam. He served as the first Vice President of the Kalakshetra, under the governor of Assam as the President. This center was built in the memory of Assamese cultural legend Srimanta Sankardev (1449–1568).

You have subscribed to alerts for Dr Bhabendra Nath Saikia.

Would you like to favorite Dr Bhabendra Nath Saikia?

You have been added to Dr Bhabendra Nath Saikia's favorite list.