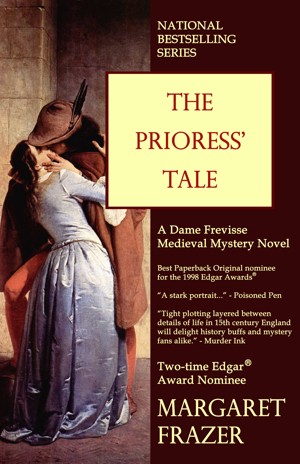 By Margaret Frazer
Under the harsh hand of its newly elected prioress, St. Frideswide's has become a place of deadly sin. The corruption has found fertile soil in the rage and greed of Domina Alys, who has turned the priory into a boarding house for her relatives, the Godfreys. If Frevisse cannot save the nunnery from itself, then St. Frideswide's may be no more...

NOMINATED FOR THE 1998 EDGAR AWARD More
DARK CORRUPTION AND THE PENITENCE OF DEATH...

Under the harsh hand of its newly elected prioress, St. Frideswide's has become a place of deadly sin. The corruption has grown subtly and slowly, but it has found fertile soil in the rage and greed of Domina Alys, who has turned the priory into a boarding house for her relatives, the Godfreys. Dame Frevisse is horrified to discover that the modest stores of the priory – desperately needed if the nuns are to survive the coming winter – are being completely consumed by the rapacious Godfrey clan.

But the Godfreys bring with them more immediate terrors: Torture. Madness. Kidnapping. Murder. The sanctuary of the cloister has been violated and even the holy rites of the nuns have been ripped apart.

Despite the growing crisis, Frevisse's best efforts to save the nunnery from itself are met with scorn and torment as bitter hatreds and old rivalries turn nun against nun. Suspicion, paranoia, and despair clutch the cloister's heart. If Frevisse cannot unlock the riddles of penitence for her prioress and for herself, then St. Frideswide's may be no more...

NOMINATED FOR THE 1998 EDGAR AWARD

PRAISE FOR THE PRIORESS' TALE

“When this series debuted, its publisher hailed Frazer as the logical successor to Ellis Peters... With a number of strong books already under her belt, Frazer may actually make her publisher’s dream come true.” – Star Tribune

“Often chastised for her disobedience and made to do penance, Sister Frevisse’s curious nature still wins out as she uses logic and her intelligence to sleuth with the best of them.” – Rendezvous

“Frazer is writing one of the most consistently excellent historical series in print today.” – Murder Ink

"Clearly, the setting is the star here, and Frazer is generous with her details of abbey life." - Publishers Weekly

“Margaret Frazer continues her splendid series of medieval mysteries... She has a sure grasp of the realities of medieval life: Its careless cruelty, effortless hypocrisy – particularly in matters of religion – and its disregard for women who could wield influence only in the most indirect ways.” – MLB News

“Margaret Frazer has quietly claimed her place as one of the preeminent writers of historical crime fiction, delivering the whole package – a good mystery, wonderful characters, and a fascinating period of history... Her novels are a dream to read.” – Aunt Agatha’s Newsletter

To begin with, ‘Margaret Frazer’ was two people, both interested in writing and in medieval England, one of them with modern murder mysteries already published, the other with file drawers, shelves, and notebooks full of research on England in the 1400s. They met in a historical recreationist group called the Society for Creative Anachronism and joined forces to write The Novice's Tale, the first in a history mystery series centered on a Benedictine nun, Dame Frevisse, of a small priory in Oxfordshire. Both character and setting were chosen for the challenge they presented – a cloistered nun in a rural nunnery: how does one go about being involved in murders in that situation? -- and the chance to explore medieval life from a different perspective.

During their collaboration, the authors worked together by first laying out the general idea of a story. Then the ‘Frazer’ half of the team developed the plot and characters in detail and wrote the first draft. The ‘Margaret’ half then re-worked that into a second draft, the ‘Frazer’ half re-worked that (and it helped they lived five miles apart and couldn’t hear what each said about the other during these stages!), and then they did the final draft together, never able to argue over it too long because by then there would be a deadline closing in. The collaboration worked well through six books and two award nominations – an Edgar for The Servant's Tale and a Minnesota Book Award for The Bishop's Tale – before the ‘Margaret’ half grew tired of the series and amicably returned to the 20th century, leaving the ‘Frazer’ half to continue the series, with an Edgar nomination for The Prioress' Tale.

I write stories set in medieval England because I greatly enjoy looking at the world from other perspectives than the 20th century. My brief college career was as an archaeology major with writing intended as a hobby, but with one thing and another, my interest came down to medieval England with writing as my primary activity, only rivaled by my love of research. But why medieval England, especially for someone who grew up without any interest in knights in shining armor and ladies fair? That’s a tangled tale but the final steps were seeing a production of Shakespeare’s Richard II and soon thereafter reading Josephine Tey’s The Daughter of Time. The complexities of honor and duty and betrayal, mixed with a curiosity as to how the high tragedies of the 1400s came about intrigued me and to understand more I needed to understand how people then saw their world and why they saw it that way. That set me into learning about medieval English politics, religion, philosophy, sociology, economics -- all the multi-layered elements that go into making the lives of people in any time period. I wanted to know the landscape of the time not only outwardly – by way of many trips around Britain – but inwardly – how the world looked and felt to the people who lived then, rather than how it looks to us now. And when the chance came to write a mystery series set in medieval England, I wanted to do it from as far inside medieval perceptions as possible, to look at medieval England more from their point of view than from ours, because the pleasure of going thoroughly into otherwhen as well as otherwhere -- the chance to move right away from the familiar into a whole other way of seeing and behaving -- has always been one of my own great pleasures in reading. As a writer I deeply want to give that same pleasure to others.

So – in everyday life, I’m Gail Frazer, living in the countryside north of Elk River, Minnesota, with four cats and not enough bookshelves. Over the years I’ve had a rag-tag of various jobs, including librarian, secretary, reseacher for a television station, gift shop manager, and assistant matron at an English girls’ school. Married once upon a time but not anymore, I have two well-grown sons who become uneasy if I read books about poisons at the supper table and refuse to turn their backs on me when I say I want to try something I might use in a story. I write more days than not, and when once I moaned that "I have to get a life," my loving family informed me, "You have one. It’s in the 1400s." That seems to sum up things rather nicely.

You have subscribed to alerts for Margaret Frazer.

You have been added to Margaret Frazer's favorite list.

You can also sign-up to receive email notifications whenever Margaret Frazer releases a new book.