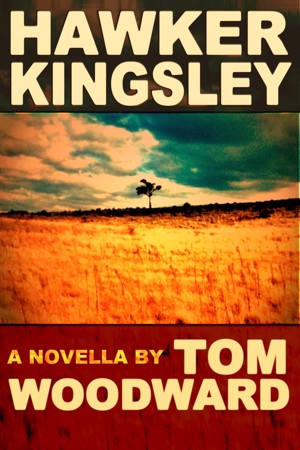 In the throes of adolescence, Elsie is growing suspicious of all her untested assumptions. She is tired of the phoniness of her teachers, the hypocrisy of her former hippy parents and the pettiness of the people around her. Hawker’s apparent rejection of the entire social world seems a panacea to her increasing cynicism. Her pursuit of the mysterious loner takes her into foreign and threatening psychological terrain in
which the safety of her suburban, middle-class childhood will be lost forever.

Hawker Kingsley is a tale about growing up, about the unpredictable, socially impervious nature of desire, and asks the question: can people ever truly be selfless?

Tom Woodward is mostly known as a recording artist and songwriter. To pay the bills, he has worked as a fruit picker, bartender, mail officer, audio transcriber and kitchen hand. He began writing fiction as a child. As of 2017, he is he is based in Tasmania, Australia.

Tom Woodward has created an intriguing, mysterious character in Hawker Kingsley, an ex-con with a daily ritual of shooting at a mannequin he calls Judy. A misanthropic loner who breeds kittens and only feels safe expressing love to them, Hawker is anything but cordial when the next door neighbor’s teenage daughter Elsie pays him a visit. In spite of the rude reception, Elsie returns with two albums she purchased as a gift for him. She persists until she wears him down, and he offers to teach her how to throw a punch.

The two are drawn together by a shared sense of alienation—Elsie being a smart, serious girl among a school full of dimwits and Hawker a former Marxist who used to belong to a motorcycle gang that sold marijuana around Australia. Woodward keenly observes how the teenage characters in the book seem to exist outside of an age they can call their own, referring back to eras such as “the sixties” and “the eighties,” yet standing only as a reflection of the images of those times rather than the substance that defined them. “They all had facial piercings and dyed black hair,” presumably emblematic of a punk era rejection of conformity, yet an obvious act of conformity in itself.

Fans of Holden Caulfield will appreciate the homage to him represented in Hawker. Like Holden, Hawker condemns contemporary society for its phoniness and pettiness, implying that social movements fail because unified groups with strong ideals invariably devolve into fractured, reactive individuals fueled by personal vendettas and other trivial, selfish concerns. Yet such condemnation stems from Hawker’s own personal history, the unveiling of which culminates in a shocking revelation that explains why he shoots at the mannequin.

Some of the descriptions, while artful and poetic, seem to be out of place. They are effective at creating an ominous mood, but then what follows in the narrative isn’t always proportionate. At times the dialogue lacks relevance, and some scenes are unnecessarily detailed. Yet there is some very beautiful writing that evokes the spiritual receptivity experienced only in youth prior to the ineluctable loss of spirit that comes with the worldly concerns of adulthood.

Charged with a subtle sexual energy, the dynamic between Hawker and Elsie is seductive both in its forbidden nature and in its aptness. The dramatic ending will attempt to shake your faith in what you know is certain.

(review of free book)
Peter Hassebroek reviewed on Sep. 23, 2012
(no rating)
Hawker Kingsley is an embittered, philosophizing ex-con who has thought himself into isolation in Springvale, a town west of Sydney, Australia. His past is coloured by a terrible childhood, a career as a bike gang leader, and a murder conviction: a history in stark contrast to his current vocation of raising and selling kittens.

Hawker would be unnoticeable if not for his anti-social behaviour, including his daily routine of shooting the head of an effigy of his ex-wife while playing their old favourite song, by Merle Haggard. His neighbours think he’s a madman but are too scared to complain to the police, opting to steer clear of him. Except for fifteen-year-old Elsie Ashberg who lives next door. Elsie’s a deep thinker too, a writer who, in her own teenage way, feels alone in the world. She senses in Hawker a kindred spirit.

She makes the first move by appearing at his house. Instead of wilting from his gruff reaction, she buys him a CD by her favourite band, Korn, as well as one by Willie Nelson. Her naive thinking behind the latter selection, that he’s a country music fan, rather than that the Merle Haggard song has a singular emotional meaning, is way off the mark. She’s too inexperienced in life to grasp that Hawker is an iceberg of experience and depth; Elsie only glimpses the tip.

Yet her efforts affect Hawker in a positive way and his bemused tolerance gradually develops into a fondness for this girl who’s not afraid of him. Her influence subtly seeps into him just as, in a very parallel way, her juvenile fascination makes her change. His impact on her, however, is not altogether positive. This is a simple story about an unlikely relationship, told with satisfying depth.

The other characters in Springvale—primarily Elsie’s parents and friends—are well, normal. And generally this could be a criticism of a fictional work, but it mostly helps this novella, which sharply focuses on these two outcasts and their impact on each other. They need to be in the background, perhaps slightly blurred, but still distinct. Furthermore, they provide moments of levity in what could otherwise become a too-earnest story.

The writing is engaging with the handling of omniscient and close third-person points of view deftly handled. Its use effectively reveals to the reader the shifts caused by this relationship, while keeping the characters unaware of them until the end.

There are areas for improvement, though. Occasionally, there’s too much narrating (reporting?) of insignificant little action, such as when Elsie buys the CDs and the financial exchange is given in complete detail. Another aspect that concerned me was Elsie’s parents’ lack of protectiveness of their only child once they see her fraternizing with this potentially violent neighbour. It seemed too easy and convenient at times for Elsie and Hawker to get together.

These minor distractions take nothing away from an intensely compelling story. You can’t do much better with a free download by an author who understands people and how to portray them.

You have subscribed to alerts for Tom Woodward.

You have been added to Tom Woodward's favorite list.

You can also sign-up to receive email notifications whenever Tom Woodward releases a new book.