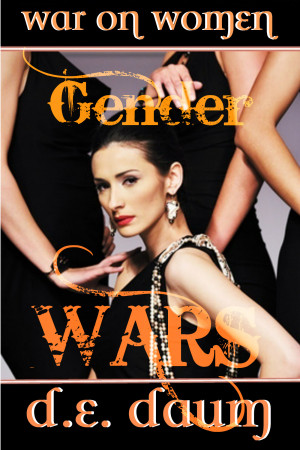 By D.E. Daum
Rated 5.00/5 based on 2 reviews
Disgusted with the GOP War on Women, a group of determined women take matters into their own hands & form a women's political party. Initially discounted by established political parties, they change their tune when women & men join in droves.

GENDER WARS is a Political Chick-lit story, tied to the Republican 'War on Women' that would appeal most to politically middle and right of center readers More
"We take you to Richmond, Virginia, where Jenna Kenner is standing by. Jenna, what's going on?"

"Thanks Jeff. I'm at the Virginia capital, where a group of peaceful, but angry women are demonstrating."

"A thousand, I would guess."

"One of the signs reads, 'Keep Yer Stinking Laws Out of My Vagina'. What are they upset about?"

"They're upset over a new abortion law the legislature passed last night where a woman seeking an abortion would have to undergo and pay for a Trans-vaginal Ultrasonic Probe."

"Ugh, sorry. I see a sign that reads, 'WOMEN HAVE RIGHTS TOO'. Would you ask her why she and her friends are mad and what they want?"

"I think she's the leader. I'll ask her"

"Hi, Doris. I'm Jenna Kenner with National News. I'd like to ask you a few questions if I may."

"I take it your group is protesting the new law the Governor has promised to sign today."

"And you'd be right. We want Governor "Ultrasound Bob" to know that the people this most affects don't like this stinking law, and women across the country are not going to forget."

Doris rested her sign on the ground. "Absolutely, Virginia isn't the only state where self-righteous men are sticking their nose in our panties."

"I don't understand. What do you mean?"

"The Pachyderms have been having a field day approving regressive legislation in Republican-controlled states across the country."

"Yeah, you know, the elephants in the room."

"I know. Republicans know the public doesn't support their laws so they're passing them, while everyone sleeps and being real quiet about it."

"So there you have it, Jeff. These women feel there is a war on women, to deny their hard fought gains on women's rights."

"Thank you, Jenna. We'll keep following this story, but right now, I have the Chairman of the Republican Party, Crowe Magnon, and the President of the Women's League, Molly Markum. Molly, we'll start with you. What do you think about all this?"

Molly, frowned. "Extremists have started a war on women. With the misguided war in Iraq over and the forgotten war in Afghanistan ending, the GOP's fingers are itchy. So looking around they've discovered women. They don't like the advances we've made over the last fifty years—"

"Humph! If you don't mind! Jeff asked me a question, and I was answering before you rudely interrupted. As for your assertion that men adore women, most men do, but not the petty Republican men. They think women, despite being fifty-one percent of the electorate, having a measly seventeen percent of the seats in Congress, is too much. They think women heading twelve of the fortune 500 companies is too many, and they have the nerve to think women making 77 cents for every dollar men make is too much!"

Crowe ran his fingers through his dark blond hair. "May I speak now?"

Molly glowered at Crowe, but Jeff said, "Go ahead."

"The 77% figure has been debunked. Men work more hours and overtime."

Molly snarled. "That's total horse shit and you know it."

"We're talking about your figures, not mine."

Molly stuck her chin out. "You don't scare me, you bag of misinformation. We're talking about equal work for an equal amount of time and women make 3/4 of what men make. You're trying to take us back to the Father Knows Best days. Listen, you Neanderthal, father doesn't know best—he never did. Mother knows best. If men were the ones having babies there wouldn't be a pro-life movement. Conversely, if women ran this country we wouldn't have the economic basket case we have today."

i just finished reading it..its owesome. It caught my full attention from starting till the end. All the the best Dee.

Dee puts the POW back in Power, specially GIRL POWER!
If only it were true life and not fiction...
Engaging and riveting.
Please, Miss Dawning, can we have some more?

You have subscribed to alerts for D.E. Daum.

You have been added to D.E. Daum's favorite list.

You can also sign-up to receive email notifications whenever D.E. Daum releases a new book.