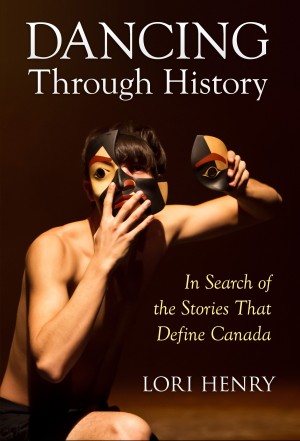 Dancing Through History: In Search of the Stories That Define Canada

By Lori Henry
Some people travel to discover a country’s architecture; others to sample its cuisine, or experience its nature. For author Lori Henry, travel is a way to discover a country's dances. More
In Dancing Through History, Henry crosses Canada’s vast physical and ethnic terrain to uncover how its various cultures have evolved through their dances.

Her coast-to-coast journey takes her to Haida Gwaii in British Columbia, where she witnesses the seldom seen animist dances of the islands’ First Nation people. And in the Arctic, Henry partakes in Inuit drum dancing, kept alive by a new generation of Nunavut youth. And in Cape Breton, she uncovers the ancient “step dance” of the once culturally oppressed Gaels of Nova Scotia.

During her travels, Henry discovers that dance helps to break down barriers and encourage cooperation between people with a history of injustice. Dance, she finds, can provide key insight into what people value most as a culture, which is often more similar than it seems. It is this kind of understanding that goes beyond our divisive histories and gives us compassion for one another.

Lori Henry is a writer, author and actor based in North Vancouver, Canada. She has been dancing since she was two years old. Read her travel, culture and lifestyle blog, Lori’s List: More than Travel (www.LorisList.ca).

Lori Henry is a travel writer and voice actor based in Vancouver, Canada.

Lori uses dance as an access point to learn about diverse cultures. Her fascination with the subject began with Polynesian dance lessons when she was two years old, learning how to chant in Hawaiian, sing and dance Maori kapa hakas, and shake her hips to Tahitian drums not long after she had learned to walk. She also trained in various other dance forms and played competitive ringette (similar to hockey).

Lori has spent the last 10+ years working as a freelance writer focusing on travel and culture. Her work has been published all over the world in publications like Readers Digest, Air Canada's enRoute, WestJet's up! magazine, Western Living, British Columbia Magazine, Spa, FLARE, West, USAToday.com, and Fodor's, to name a few.

Lori holds a master's degree in Dance Anthropology with distinction from Roehampton University (London, UK). She conducted her fieldwork with the Whirling Dervishes of West London and her dissertation was titled, "Towards a Non-Hegemonic Anthropology of Dance."

You have subscribed to alerts for Lori Henry.

You have been added to Lori Henry's favorite list.

You can also sign-up to receive email notifications whenever Lori Henry releases a new book.