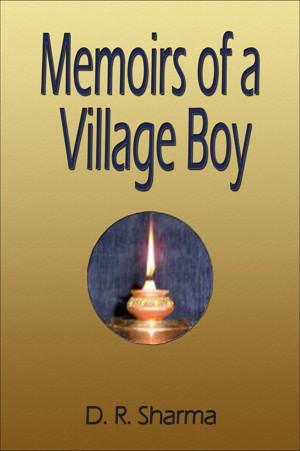 Memoirs of a Village Boy

By Dharmbir Rai Sharma
The book narrates the life story of the author from early childhood in a typical village in India to a retired life in the United States. It shows the courage and determination of a father to give the son the best possible education in spite of having no resources to speak of. Still he manages to send him to university. The son gets a respectable Government job but later goes to USA.

D. R. Sharma is a retired professor with physics and electrical engineering background. He was born in India and received most of his education there obtaining a Master's degree in physics and then worked for ten years in the Indian Meteorological Service. After that he came to the United States and obtained a PhD in electrical engineering at Cornell University. He has taught at a few universities here and also in Brazil where he lived for some six years. During the last ten years of his professional career he worked at the U S Army Research and Development Engineering Center in St. Louis, MO where he also taught at a university as an adjunct professor.
After his retirement he took to creative writing as a hobby. His first publication was a novel: What Dies Is Not Me. After writing several other non-fiction books he decided to explore the interplay between philosophy and science. He has had a lifelong interest in Vedanta and most of his writings reflect that. He has written several articles and eBooks. Currently he lives in Austin, Texas.

You have subscribed to alerts for Dharmbir Rai Sharma.

You have been added to Dharmbir Rai Sharma's favorite list.

You can also sign-up to receive email notifications whenever Dharmbir Rai Sharma releases a new book.