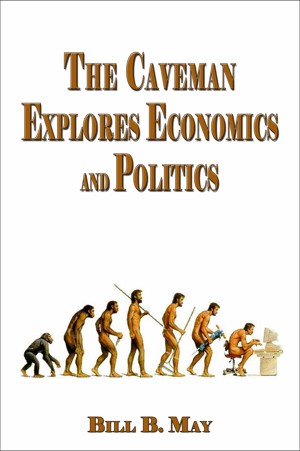 The Caveman Explores Politics and Economics

By Bill B. May, PhD
This book is designed to present to the reader in simple terms how government and economics work. The basics are examined in the context of a small caveman tribe and then related to the modern world. It explains monetary inflation and deflation, the creation of money by the banking system, and why tax receipts may increase with lower tax rates as well as many other aspects of the economy. More
This books begins with a tribe of caveman and examines the human nature of its members to see how they react to different aspects of government and economics. The need for a government that is fair and equitable is essential to gain the respect of the citizens. Many forms of government can arise but usually some portion of the population is unhappy with the decisions, even under a democracy. A constitutional government founded on the basis of liberty is important but even then conflicts in liberty can happen. Government’s job is to resolve these conflicts with compromises in laws or regulation.
The book examines the need for money and what happens when a society has too much or too little money; inflation or deflation is the result. Taxes are the way that government can pay for its existence but the book shows that government should do the minimum required to satisfy its main aims, usually protecting the people. Because most governments produce little that a consumer really wants, money spent on government takes away from productive activities. As a result, continuing to increase tax rates can actually decrease tax receipts because the economy suffers when too much money is spent on government.
Liberty is also key in economics because it allow people to exchange items, either in barter or with money.
The Central Bank (Federal Reserve) is a mysterious entity to most people. The basics having to do with banking are covered along with the Central Bank being influenced by popular demands to print more money. The resulting inflation is a hindrance to planning and to lenders who find that their money has lost value. Banks too can create money “out of thin air” by using depositor’s money for loans, without their permission.
Because of its taxing authority, government is considered the solution to all problems. Unfortunately, there are always more potential uses for the money than taxes can provide. The natural tendency of politicians is to promise more goodies resulting in a government deficit. A proposal to require a super-majority democracy is suggested as a potential solution.
Economies are subject to bubbles and downturns. Often excess money comes about by too liberal of a policy regarding the money supply resulting in a misallocation of capital and a bubble. To absorb the foolish investment of money requires that it be purged out of the system which is why we normally see recessions after the bubble bursts.
The principles developed in the book are then applied to contemporary issues like a farm program, schools, companies and unions.
The great advantages of competition in human activity is discussed, no matter the vocation. One of the weaknesses of a central government is that it is basically a monopoly.
International economics is also covered in a section of the book. The value of the respective currencies is discussed as well as the balance of payments. Two Appendices go into more detail on money and what might be an ideal amount in an economy. The author develops an approach to decide what is the right amount and that leads to some implications for diverse questions,for example the impact of immigration on money needed.
The book makes simple work of certain concepts like Tragedy of the Commons and Rent Seeking. These are concepts easily understood by the average person. Applying these concepts to politics and economics makes clear some of the reasons that these institutions behave as they do.
When finished reading the book, I hope you will have become a more educated voter and citizen in the field of politics and economics.

Bill B. May was raised on a farm near Sturgis, South Dakota, during the Depression and WWII. After high school, he chose to attend a nearby technical college, the South Dakota School of Mines and Technology earning a Bachelor's Degree and a Master's Degree both in Electrical Engineering. With a wife, one son and another on the way, they headed for California so he could pursue a PhD in EE from Stanford University. To support the budding family, he worked at the Stanford Electronics Laboratories in the position of Research Engineer while receiving his degree. He continued on at the Laboratory working on classified projects for the Department of Defense.
In the late 1960s, the anti-war protests came to Stanford and the building where Dr. May worked was occupied by protestors of the Viet Nam War. The protestors eventually left the building, not much worse for the wear, but they subsequently convinced the University to ban any further classified work.
Dr. May and seven other employees of the Laboratory formed a company in 1969 called ARGOSystems to continue their work for the government and to pursue actual product in addition to their previous research efforts. The company grew steadily and in 1982, Dr. May led ARGOSystems in a public offering of stock. Growth continued thereafter and the company was purchased by The Boeing Company in 1987. Dr. May remained with Boeing as a Vice President until his retirement in early 2002.
Since that time, Dr. May has advised companies and charities, mostly through Board of Director activities. He currently serves on the Board of two companies and The Tech Museum of San Jose. Since retirement, he has developed an interest in economics, finding that his philosophy closely matches that of the Austrian school of economics.
These experiences led him to express his thoughts to the outside world through two web sites: NewsBalance.com and Cavemannews. As a result of these efforts, the caveman concept was formed in order to keep economics on a simple level. As with many fields, the participants use some long words to define certain processes that are simple in concept. Economics is no exception. After writing many articles (and reading many more), Dr. May decided to incorporate his ideas into a book, this book. The intention is that this book will be understandable to the average citizen, who is unschooled in economics.

Learn more about Bill B. May, PhD

You have subscribed to alerts for Bill B. May, PhD.

Would you like to favorite Bill B. May, PhD?

You have been added to Bill B. May, PhD's favorite list.

You can also sign-up to receive email notifications whenever Bill B. May, PhD releases a new book.