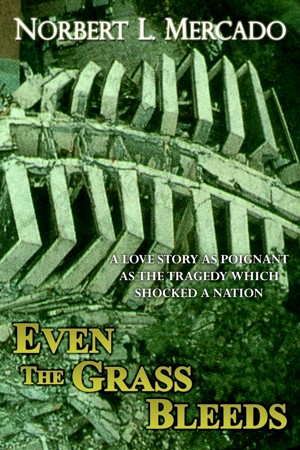 Even The Grass Bleeds

"In this age of revolution, the contemporary writer should utilize the pen for the preservation of peace," Norbert Mercado, a Filipino author, stressed. The books he has written and published, including his anthologies, unapologetically assert the indispensability of peace in a nation’s progress.

The author has written more novels than any Asian writer had in just a brief period of time. In fact, he has surpassed the number of novels written by world-renowned novelists like Russian author Alexander Solzhenitsyn (winner of the Nobel Prize in Literature, 1970) and American authors Ernest Hemingway (winner of the Nobel Prize in Literature, 1954). Solzhenitsyn has four novels to his credit, while Hemingway has eight.

His style of writing is simple and succinct, but poignant and colorful like Hemingway’s THE OLD MAN AND THE SEA, and Solzhenitsyn’s ONE DAY IN THE LIFE OF IVAN DESONOVICH. "The simpler the novel, the better," he said.

In line with Japanese Yasunari Kabawata’s writings about the Japanese way of life, most of Norbert’s novels focus mostly on the current situation in his country. Kabawata is the winner of the Nobel Prize in Literature in 1968.

His books present hope to the Filipino, especially to the "economic exiles" in Hong Kong, Macau, and Taiwan whom he has spent most of his time with, in their daily struggles. But most of all, his novels lucidly show the futility of war and violence in the resolution of political-economic-class conflicts in the Philippines.

"War should not be used as an instrument in resolving political conflicts. Writers who abet wars and revolutions must think of the widows and the fatherless, the chaos, destruction, and suffering of the people whom they claim to be concerned about," he said.

What if, like Solzhenitsyn, Hemingway, and Kabawata, he eventually wins the Nobel Prize? What will he do with the US$1,000,000 award?

"I will use the prize for establishing a Peace Foundation that will assist in the formulation of policies which will resolve the current shooting conflicts in the country and help alleviate the continuing poverty of our countrymen."
He will take charge of the foundation and personally campaign for a peaceful settlement of the conflicts in the Philippines.

"The insurgency and the secessionist rebellion have foreign support. A Nobel title will give me the personality to approach the leaders involved in the conflicts," he explained.

Born on March 25, 1955, he is the youngest among the children of Mr. and Mrs. Aurelio Mercado, Sr. of San Manuel, Tarlac. He graduated from the University of the Philippines in Diliman, Quezon City, with two degrees, Bachelor of Arts in Journalism and Bachelor of Arts in Broadcast Communication. Voted Outstanding Campus Journalist in 1974, he was a columnist and associate editor of the Philippine Collegian, the campus publication of the University of the Philippines. He has also written articles for various newspapers and magazines in the Philippines, as well as abroad. He also won the 1981 National Essay Writing Contest sponsored by SIDESTREETS Magazine.

Norbert is a graduate of the National Defense College of the Philippines (NDCP), the topmost armed forces school in the country, where he was conferred a Master’s degree in National Security Administration (MNSA) and the rank of Lt. Colonel in the Armed Forces of the Philippines (AFP). He graduated from the NDCP at the age of 32, the youngest in Class 21 which had already produced several generals in the Armed Forces, and the youngest graduate in the history of the National Defense College of the Philippines. He was elected one of the fifteen directors of Class 21.

He was conferred the degree of Doctor of Divinity (Applied Servanthood), Honoris Causa, for his almost 30 years work in Christian literature. His batch mates include Senator Robert Barbers, Undersecretary of Trade and Industry and Bulletin Columnist Nelly Villafuerte, Actor and Producer Fred Galang, Rev. Peter Vasaya, and the His Royal Highness Sultan of Sulu and Sabah Ishmael Kiram.

A sports lover, he was a rifle marksman in his UP ROTC days, and a winner of the 1988 and 1989 5,000 meter-run sponsored by the National Defense College Alumni Association. His sports include swimming, basketball, volleyball, boxing, karate, cycling, and marathon among others.

A traveler, he has attended various international conferences and trainings in Asia and Europe. His travels have widened his insight not only of places, but also of people he has constantly observed and empathized with.

He is the youngest graduate of the Singapore Haggai Institute for Third World Leaders in 1980 at the age of 24.

"Let us work for peace in our country, in any way we can," Norbert stressed. Jesus said, "Blessed are the peacemakers."

Even The Grass Bleeds Abridged Edition
visit http://norbertomercado.blogspot.com/ On July 16, 1990, the most devastating earthquake in Philippine history takes place. Daniel, an engineering student is trapped beneath the rubble of the Hyatt Terraces Hotel. Rose, his girlfriend, is an OFW in Hong Kong. She awaits news of his situation.

Reviews of Even The Grass Bleeds by Norbert Mercado

You have subscribed to Smashwords Alerts new release notifications for Norbert Mercado.

You have been added to Norbert Mercado's favorite list.

You can also sign-up to receive email notifications whenever Norbert Mercado releases a new book.