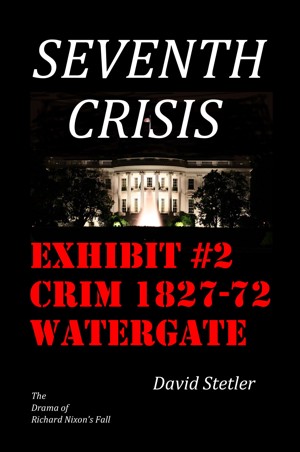 By David Stetler
Seventh Crisis depicts crimes that caused President Nixon to resign and which jailed thirty of his aides, including his Attorney General. You will witness a million dollars in payoffs, Howard Hunt's successful blackmailing of the White House, Nixon's okaying bribes and other crimes committed by the White House....

You will feel the heat of Watergate in only 200 pages, in one drama-filled evening. More
"If it please the court," said the prosecuting attorney for maybe the twentieth time.

As soon as Earl Silbert had completed his hour-long opening statement, Judge Sirica dismissed the jury but summoned the prosecution team to the side bar.

With Silbert, Glanzer, and Campbell standing before him like defendants awaiting their fate, Sirica waited until the courtroom was cleared.
"Gentlemen, I'm afraid I must remind you of a few things we've already gone over. I've jotted down several questions brought up by your opening statement, Mr. Silbert. To start with, will there be any attempt to trace the money found on the defendants?"

"Yes, there will be, if it please the court."

"I'm sure we've all been reading the Post over the weekend—there have been a few items of interest, you know. For example, are you going to offer any evidence as to how a $25,000 check, perhaps a political donation, got into the possession of Mr. Barker?"

"Beg your pardon, Your Honor?"

“The check from a Mr. Kenneth A. Dahlberg, the check for $25,000 that I read about in the newspapers this weekend, the check which, after I undertook a rather lengthy Saturday afternoon walk, did not show up in the list of evidence produced by your office. The $25,000 check that the newspapers seem to know more about than does the prosecution. You are going to offer this check into evidence, are you not, Mr. Silbert?"

"We have several items yet to mark, Your Honor. That check will be among the exhibits, if it please..."

"Will the $89,000 in checks that came up from Mexico be traced back to their source?"

"Not necessarily to their source, your Honor, but we will trace the Mexican checks part of the way through the system."

"Why not trace them all the way to the source? Isn't that part of your case?"

"A full accounting, Your Honor, would require testimony from a man out of this country."

"What do you mean by 'out of this country'? It's perfectly all right to be specific with me."

"The man is a Mexican national, Your Honor, over whom we do not have subpoena power."

"I understand that this man—whose name is Manuel Ogarrio Daguerre, according to the Post—does business with oil companies in Texas regularly. As part of good business practice and in hopes of future dealings within the United States, I would guess that this entrepreneur might be more willing to talk to us than you indicate, Mr. Silbert—perhaps without being subpoenaed."

"We simply exercise no power…"

"In your opening statement, Mr. Silbert, you seem to make money the culprit, yet you cannot trace a few checks to their source?"

"And does the government propose to offer evidence as to other motives—perhaps political—for entering the DNC?"

"There will be some evidence, if it please…"

"What exactly do you mean by 'some evidence'?"

"There will be some political evidence introduced, Your Honor, but you see it is a question on which the jury will have to make the proper inferences. It is up to the jury to accept or reject the evidence that we propose to offer, but there will be evidence we will offer from which a jury may draw, we think, an appropriate inference as to perhaps a variety of interests, if it please the court."

"It does not please the court, Mr. Silbert. Although I am the grandson of an immigrant, I am a simple man who speaks only one language, the English language—and I'm sorry to tell you that I failed to understand most of what you just uttered. I sincerely hope, Mr. Silbert, that things become clearer to me as this trial progresses. You may join the rest of the court for lunch, gentlemen."

David Stetler’s parents were living fifty yards from the Texas-Louisiana border, at the foot of the Sabine Pass Coast Guard Station when Dave was born. Sabine Pass, Texas, had survived many hurricanes over the years, but the village was blown out to sea in 2005 and again in 2008. Dave's father served in ports from Boston to Key West to Corpus Christi, and so Dave had the good fortune to live much of his childhood as an undisciplined pugilator in Port Aransas, Texas. Also, he endured the strict Catholic discipline of his mother's hometown, Breaux Bridge, Louisiana, where he acquired an acquaintanceship with the Cajun language and a lifelong interest in Cajun cooking—his family and relatives being the best cooks along the Bayou Teche. He declined a scholarship offer from the College of William and Mary and spent two years in the U.S. Army to attend, on The G.I. Bill, The University of Texas, where he truly was intended to go, from which he graduated, and where he was reluctantly tolerated by the great teacher and scholar, T.G. Steffan.

Dave taught at U.T. as a graduate student, at Texas A&I University, and in Augusta, Georgia, where he has lived since 1967. He has touched hands with Ella Fitzgerald, Earl "Fatha" Hines, Jessye Norman, Luciano Pavarotti, Odetta, Irma Thomas, Hans Richter-Haaser, Aaron Copland, John Carradine, David Madden, Erskine Caldwell, Norman Mailer, Upton Sinclair, Katherine Anne Porter, Eudora Welty, John Barth, Reynolds Price, and James Dickey. He received a gift from Walker Percy after forwarding to him a first edition of The Moviegoer that had been autographed by Rory Calhoun, who didn't know that he was, in a way, the star of the novel.

Dave hopes to complete four more novels, which he’s been working on for twenty years. Most importantly, he enjoys the affection of three sons and five grandsons.

You have subscribed to alerts for David Stetler.

You have been added to David Stetler's favorite list.

You can also sign-up to receive email notifications whenever David Stetler releases a new book.