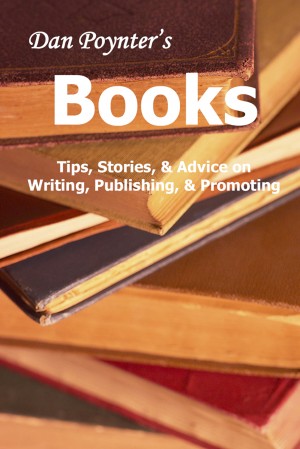 By Dan Poynter
Scores of successful published authors reveal the inside secrets to their achievement.

Scores of successful, published authors reveal the inside secrets to their achievement.

You will discover:
• 38 Tips on how to write
• 11 Tips on why you should write
• 4 Tips on why your writing project should be a book
• 21 Tips on what to write
• 7 Tips on doing research
• 9 Tips for building your book
• 3 Tips on Copyright
• 10 Tips for finding the right agent or publisher
• 6 Tips on book promotion
• And much, much more.

“We recommend this book to all who submit their stories to Chicken Soup for the Writer’s Soul.” —Bud Garner, Chicken Soup series co-author

“Dan Poynter has generously guided thousands to authorship. Their books make this a better world.” —Dr. Robert Müller, Past Assistant Secretary General of the United Nations

Dan Poynter has turned thousands of professionals and writers into authors; his shelves are overflowing with their books. He is the author of more than 125 books and hundreds of other information products. The media come to Dan because he is the leading authority on how to write, publish, and promote books.

The demand for books is increasing but the market is changing. These tips from successful authors will show you how to get your work into print.

Dan Poynter is a pioneer in book writing, producing and promoting. His New Book Model or “Simultaneous Publishing” is revolutionizing the book industry and information dissemination.

He is a frequent speaker, successful publisher and renowned book publishing consultant, who has a unique, pioneering approach to marketing books—which he so generously shares.

Since 1969, Dan Poynter has written and published more than 100 books including Writing Nonfiction, The Self-Publishing Manual, The Skydiver's Handbook and The Expert Witness Handbook. He has also created more than 50 reports, nine audio CDs, four video programs, a dozen eBooks and more than 500 magazine articles. He is a Certified Speaking Professional (CSP).

Dan is an author and he is a publisher who has experienced every phase of the book publishing process. He has sold his manuscripts to other publishers, he has published other authors, he has published his own books and his books have been translated and published in seven other countries.

He is an evangelist for books, an ombudsman for authors, an advocate for publishers and the godfather to thousands of successfully-published books.
Dan Poynter's seminars have been featured on CNN, his books have been pictured in The Wall Street Journal, and his story has been told in U.S. News & World Report. The media comes to Dan because he is the leading authority on book publishing.

A well-known aviation speaker, Dan is a licensed pilot, a skydiver with all the ratings and a Master Parachute Rigger.

Often described as “Mr. Publishing,” Dan Poynter shows publishers how to sell more books using some surprisingly simple marketing concepts. No one gives away more help, advice and expertise than Dan Poynter. He is a caring, sharing publisher who is dedicated to putting more than just something back into the system.

Dan shows people how to make a difference while making a living by coaching them on the writing, publishing and promoting of their book. He has turned thousands of people into successful authors.

His mission is to see that people do not die with a book still inside them.

You have subscribed to alerts for Dan Poynter.

You have been added to Dan Poynter's favorite list.

You can also sign-up to receive email notifications whenever Dan Poynter releases a new book.