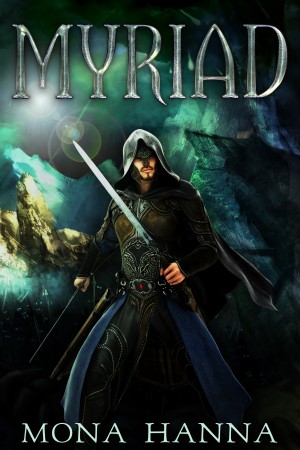 Kalin, tired of being put down for who he is, leaves home when he turns eighteen. Despite being a warlock, he’s denied his magic for years because his parents told him magic is evil. He just wants to start a new life and leave his past behind.

But then Kalin is approached by a group who tell him he has a rare kind of power—and the ability to stop a dark warlock from threatening the Royal family. Kalin doesn’t think he can help until one of the witches, a seer named Regina, has a vision about his future.

The truth behind his ability shocks him—and may lead to his death and the death of his new friends. With Regina's visions as his guide, will he decide the risk is worth taking?

Mona Hanna is an author of fantasy/romance books. She enjoys writing about love, magic, conflict, trials and the joy of overcoming them. Mona enjoys reading, movies, chocolate, and adores cats. She hopes to release many more fantasy books in the years to come.

This story is starts off with a little backstory. The once evil Warlock, Myriad, is desperately trying to save his wife and unborn child from a disease. The King has the cure which he is giving to his daughter, Princess Carmel. Unfortunately, the King selfishly use up the entire cure for his daughter and thus, sets off Myriad seeking to avenge his family's death. Myriad promises to kill three people in the Castle on the anniversary of this event until the eighteenth year of Princess Carmel's birth. Then, he will kill the Royal Family in his final act of vengeance.

Eighteen years later, we meet Kalin who is trying to start a new life. However, he meets a small group of Warlocks and Witches who have been looking for him to help stop Myriad's revenge. To learn more, you must read this book! I did enjoy this book and would recommend it to anybody who likes their fantasy with a little bit of romance.

You have subscribed to alerts for Mona Hanna.

You have been added to Mona Hanna's favorite list.

You can also sign-up to receive email notifications whenever Mona Hanna releases a new book.