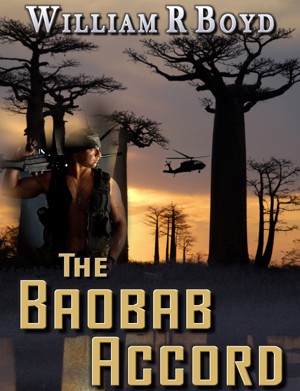 William R Boyd, born at the end of the second world war, and raised in a small coal mining community in central Scotland, spending the first twenty five years of his life there before moving to Southern Africa. During the next thirty years travelling and working in South Africa, Botswana, Swaziland, Lesotho and Rhodesia now Zimbabwe.
William (Bill) developed an interest in the peoples and the politics of this part of the sub continent; during which he experienced.
A colonial lifestyle.
An apartheid type lifestyle.
An independent black African political lifestyle.
All of which sharply contrast with one another, depending on the colour of your skin.
It was this lifetime's great experience which ignited the spark to write his first novel 'The Baobab Accord' An action book of fiction, with a hint of the barbaric black Africa, spiced with a genuine romance in high society of the German Jewish aristocracy.
William married with two sons, one in South Africa and the other in the UK. He has been a general and technical writer during his business life, and has been retired these past seven years, living a quiet and peaceful lifestyle back in his rural Scotland.

You have subscribed to alerts for William Robert Boyd.

You have been added to William Robert Boyd's favorite list.

You can also sign-up to receive email notifications whenever William Robert Boyd releases a new book.