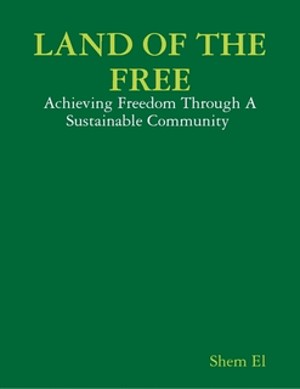 Land of the Free: Achieving Freedom Through a Sustainable Community

By Shem El
"Land of the Free" is more than just a book about sustainability. It is also a book about self-determination. This book is not a “how to” book. It was written to put the idea of sustainability foremost in the minds of people who are on the path to self-sufficiency.

There's a book that offers the solutions. If you are truly concerned about the future, then "Land of the Free" is a must read!

Shem El is a radio host, Director of Media Operations for The Tamare Project and the author of the prolific book entitled LAND OF THE FREE. Born and raised in New York, Shem El learned the importance of cultural heritage and cultural pride for people of diverse backgrounds at an early age. Yet, it was not until he relocated to the South that he discovered the role that land plays in establishing that cultural heritage and pride. It was this epiphany that eventually led Shem El to further his research which produced his first book LAND OF THE FREE.
​
In 2011, Shem El became Director of Media Operations for The Tamare Project. The Tamare Project is a homesteading project which embodies the principles and implements the practices of sustainable “village” life to the benefit of its residents and to others locally, nationally and internationally. Shem El is also the host of Tamare II Online Radio which is available on blogtalkradio.com.

You have subscribed to alerts for Shem El.

You have been added to Shem El's favorite list.

You can also sign-up to receive email notifications whenever Shem El releases a new book.