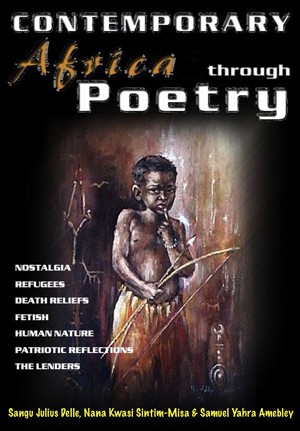 SANGU JULIUS DELLE
Sangu is the Co-Founder and Executive President of the African Development Initiative (ADI), a social entrepreneurial 501(c)(3) non-profit organization dedicated to investing in opportunities to improve the health, education and economies of communities in low resource settings. He graduated with Highest Honors in African Studies and Economics from Harvard University where he was the recipient of the Thomas H. Hoopes prize and the Reverend Peter Gomes prize for citizenship and leadership. In 2011, Sangu was nominated by esteemed Harvard professor Henry Louis Gates Jr. and selected by Fortnight Journal as one of the “promising leaders of the Millennial Generation.” Sangu has loved reading and writing from an early age and wrote most of the poems in this collection from 1998 to 2002 when he was 11 years old and 15 years old, respectively.

NANA KWASI SINTIM-MISA
Nana Kwasi Sintim-Misa studied at Cornell University in Ithaca, New York. Born in New York and raised in Ghana, he became notorious for his unique blend of hip hop and African culture in his poetry. Nana has been recognized for his work as both a scholar and a satirist. His first poem “The Black Joke” received awards from the International Poetry Society in Washington D.C. He has also won several poetry competitions in New York and Ghana. From 2002-2007, Nana was a Co-Founder and Vice- President of the Young Promoters of Health and Human Right, an NGO established to cater for children living with HIV/AIDS. Nana currently lives in Accra, Ghana and his interests include art, music, film and philosophy.

SAMUEL YAYRA AMEBLEY
Amebley Samuel has a passion for writing and has taught English Language, English Literature and French for over twelve years. He has been a source of inspiration for many students and has taken time to nurture and motivate people from all walks of life. Currently an Assistant Registrar at the University of Ghana, Legon, he still has time to do translations, review the writing of budding writers, and prepare syllabi for Functional French and English for adults. He has also taught Business Communication and served as a tutor for some MBA students. Samuel enjoys reading, watching movies and listening to music. He is married with two children.

You have subscribed to alerts for Sangu Delle.

You have been added to Sangu Delle's favorite list.

You can also sign-up to receive email notifications whenever Sangu Delle releases a new book.