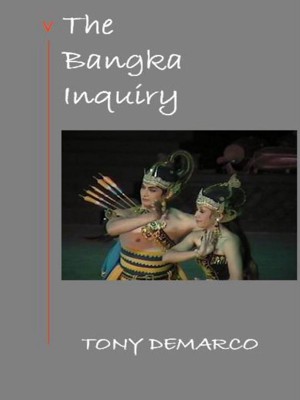 By Tony DeMarco
The story takes place in the early nineteen-nineties on a small island in the Indonesian Archipelago and includes scenes that describe the place, the people, the customs and the difficulties doing business in a third world country.
The story is peppered with colorful people from Indonesia and Australia, giving the reader insight into their customs and behavior for dealing with every day events. More
Alfred Archibald Glendenning III, who early in life eschewed his blue-blood sounding name for the more pedestrian Archie, is a senior manager in the boutique firm Chicago Consulting Group (CCG), which offers him a nine-month position as project manager for an engagement with a tin mining company in Indonesia--the successful outcome of which promises Archie advancement to full partner and the likely appointment as head of the Asia Sector. Archie is approaching the pinnacle of his career.

Hours before he is scheduled to return to Indonesia from a week's vacation in hometown Chicago he learns that Joe Prendergast, one of his staff, was killed on one of their client's tin-mining dredges in the South China Sea.

Archie's conflict within himself begins when he finds out that the death could have been prevented. Chris Morgan, an unsavory character and Archie's nemesis, through negligence, sets the scene for Joe's death. Archie must decide whether to be forthcoming and risk the project and therefore his career or should he go along with the cover-up; whereby preventing Joe's wife Catherine from seeking additional damages.

A further conflict arises when Archie finds out he is essentially a baby-sitter on this high-profile project where his boss, good friend, mentor, and person he looks up to, concludes the outcome of the project for his own financial gain through collusion with the tin-mining company's president.

Tony DeMarco was born in the Borough of Brooklyn in New York City. Like in the story Murder At Any age, his mother died during childbirth and Tony and his two sisters spent time in a convent-orphanage. Other than a few memorable scenes, everything else in the book is fiction.
He moved with his father, sisters and stepmother to Chicago, and graduated from the University of Wisconsin where he met his wife Carol. They have two sons and five grandchildren. He was formerly with Arthur Andersen and afterwards ran IDS, a management consultant firm.
He spent more than 25 years consulting in a variety of industries including assignments in Europe, with the government of Kuwait and with the World Bank in Indonesia. He likes to tell you that visiting, observing and interacting with a variety of cultures has provided him with a wealth of knowledge that through writing he hopes to exploit. In an effort to learn to speak French, he spent three months in Toulouse in southern France, where he also finished his first book The Bangka Inquiry and which, although fiction, builds on his experiences in Indonesia.
Over the past several years he has been fortunate to have taken courses at the Iowa Writer's Festival, the premier writing school in America, and is planning to attend again in Summer 2012, to plunge himself into playwriting.
Tony and his wife live in Burlington, Wisconsin and Chicago in the summer, and in Phoenix in the winter. He likes to tell anyone who might be impressed that they own three homes, that the sum total of the three is less than two-thousand square feet ... and that is not fiction!
Perhaps his favorite book is an oldie, 11 Harrowhouse by Gerald A. Browne, published by Arbor House, New York in 1972.
Tony's books are available for your Kindle or at Amazon. Hopefully you will enjoy reading them as much as he says he enjoyed writing them.

You have subscribed to alerts for Tony DeMarco.

You have been added to Tony DeMarco's favorite list.

You can also sign-up to receive email notifications whenever Tony DeMarco releases a new book.