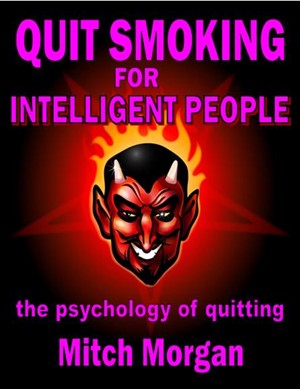 Quit Smoking For Intelligent People. The Psychology Of Quitting

By Mitch Morgan
Rated 5.00/5 based on 1 reviews
Latest University research now recognises that smoking is a habit, not an addiction.
Nicotine substitutes fail to address a vital factor - the power of the force of habit.
Here you will find techniques to identify and nullify environmental stimuli that subconsciously trigger the compulsion to smoke; techniques that dismantle the basic structure of unwanted habits. A journey of self-discovery. More
Latest University research on cigarette addiction supports the techniques advanced in this book. Habit, not addiction, is the dominant factor that is preventing smokers from permanently quitting.
In a new study published in the Journal of Abnormal Psychology, Dr. Reuven Dar of Tel Aviv University’s Department of Psychology found that the intensity of cravings for cigarettes were more influenced by the psychosocial element of smoking than with the physiological effects of nicotine as an addictive chemical. Dr. Dar’s studies conclude that nicotine is not addictive as physiological addictions are usually defined.
Dr. Dar states that, “While nicotine does have a physiological role in increasing cognitive abilities such as attention and memory, it is not an addictive substance like heroin, which creates true systemic and biologically-based withdrawal symptoms in the body of the user.”
“These findings might not be popular with advocates of the nicotine addiction theory, because they undermine the physiological role of nicotine and emphasise mind over matter when it comes to smoking.”
Dr. Dar hopes that this research will help clinicians and health authorities develop more successful smoking cessation programs than those utilising nicotine patches or gum.
The findings include the hypothesis that people who smoke do so for short-term benefits like oral gratification, sensory pleasure and social camaraderie.
“Once the habit is established, people continue to smoke in response to cues and in situations that become associated with smoking.”
Dr. Dar believes that understanding smoking as a habit, not an addiction, will facilitate treatment, and that smoking cessation techniques should emphasise the psychological and behavioural aspects of the habit and not the biological aspects.
His conclusion is that “The craving effect is produced by psychological cues rather than by the physiological effects of nicotine deprivation.”
Medical research has found that Nicotine only remains in the blood stream for approximately one hundred hours, yet most people who stop smoking cold turkey find that the craving persists for weeks or months afterwards.
The reason that this occurs is that a habit circuit has been installed in the subconscious mind, and until this habit has been addressed an individual will experience cravings, due to this hidden influence.
The most startling discovery is that cravings disappear completely when the source of the habit is identified and nullified.
The author had earlier reached the same conclusions as Dr. Dar based upon his own observations, and so proceeded to develop techniques effective in eliminating the compulsion to smoke. Compulsion stems from unidentified impulses, the origins of which reside in past decisions and experiences unwittingly retained in the subconscious mind, memories that are only slightly below an individual’s awareness.
The techniques herein are designed to gradually reveal those thoughts, allowing analytical evaluation and subsequent nullification of their controlling influence.
The key to these procedures is the discovery that all unwanted habits are the result of one’s own decisions made earlier in life to handle a specific problem. The problem might not still exist in the present, but the now-unwanted solution may persist.
Past decisions, unidentified and unacknowledged, can exert undue and unwanted influences upon one’s current existence.
This book is based upon similar principles to those outlined in Dr. Dar’s research.
It is by identifying the “cues” (triggers to craving) mentioned by Dr. Dar that enables one to neutralise these subtle controlling factors.
The aim of the book is to free an individual from enslavement to the smoking habit and to attain the power of choice over whether to stop completely or to smoke simply for pleasure and relaxation.
Quit or enjoy, you will be free to decide – but with no compulsion either way.
Whichever you decide, the “addiction” will be gone forever.

Mitch Morgan was born in Wellington, New Zealand, and now resides in a northern country town that is far removed from the frantic pace of city life, in a modest house, situated on two peaceful acres surrounded by farmland.
The startling experience of two psychic incidents, one at the age of five and the other at age thirteen, led to an insatiable thirst for the truth about life and the universe.
The spiritual side of life was not a subject covered by school curricula and was usually mentioned with scepticism or met with contempt by the public in general.
Serious studies of the human mind and the spirit as a separate entity began with extensive reading in the mid-teens and later involvement in co-operative investigation of the subject with a group of like-minded people using a newly developed science of the mind. These studies, along with the associated practical procedures and drills, culminated in Mitch briefly attaining a state of existence that was incomprehensible even to his fellow students - a state of pure spirituality completely separate from, and at cause over, the physical universe.
What does all this have to do with a book on how to quit smoking?
This elevated state was triggered by the cognition that everything is the result of pure thought. Everything!
Your life experiences and actions are the result of decisions that you have made.
Past decisions subconsciously determine present actions and cause problems in the present until they are identified and nullified.
Circumstances change but old decisions persist – leading to unwanted habits.
Mitch found that efforts to beat the smoking habit were causing a lot of misery to a lot of people and so decided to record in ebook form the techniques that had proven to be successful for him with the aim of helping others.
Now that this book is complete Mitch can get back to writing another about his spiritual adventures and continue with his goal of finding the path to regaining this now-lost state of spiritual freedom and mapping out a path for others to follow.
The force of habit is powerful – may the force no longer be with you.

Finally, someone who has the common sense to break the age old myths about breaking addictions and habits, much like I've been saying in 'Conquer Your Addiction' and other titles this reveals the plain fact that most of 'addiction' is simply a repeated habit and is in the behavior as well as the mind. Breaking addictions has become an industry worth a lot of money, especially with smoking where you can buy 'nicotine gum' and 'nicotine patches' but Mitch here shows a no-nonsense approach that actually works.

You have subscribed to alerts for Mitch Morgan.

You have been added to Mitch Morgan's favorite list.

You can also sign-up to receive email notifications whenever Mitch Morgan releases a new book.