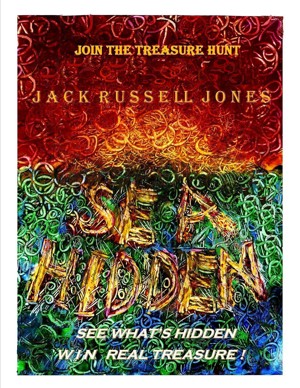 Jack Russell Jones lives in Rhode Island, the "Ocean State". He learned about carousels from a group in his neighborhood that hand paints and carves carousel horses. Jack is an ordained minister, and has served with a number of churches and chaplaincies. He currently helps to organize a Sunday morning worship service with a meal designed to be a means of introducing homeless persons to friends and supporters. Jack plays guitar, writes songs, and has co-written a musical. He actually thinks that the invention described in SEA HIDDEN for generating electricity while growing food, disposing of waste, sequestering carbon and purifying water might actually work. He is hoping that sales of this book would help him raise enough money to build a working prototype.
Jack especially enjoys making up stories and discussing books with his children. Of course, he loves reading mystery novels, and looks forward to reading , editing, and helping to launch other writers mystery novels with the MrE-Contest publishing concept.

You have subscribed to alerts for Jack Russell Jones.

You have been added to Jack Russell Jones's favorite list.

You can also sign-up to receive email notifications whenever Jack Russell Jones releases a new book.