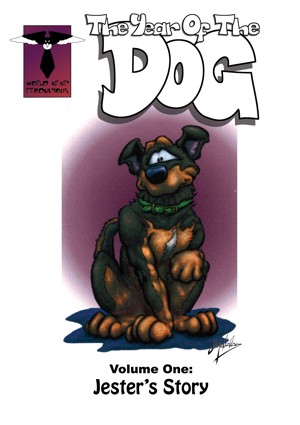 The Year of the Dog Volume One

Told from Jester's viewpoint the first volume of The Year of the Dog chronicles the events and people he encounters on entering the strange and confusing world of humans.

The everyday things we take for granted can seem very strange to canine eyes. Our world with its moving boxes traveling along stone floors, big noises and even our day-to-day behavior can be both frightening and entertaining to our furry companions.

The Legend of Sam Madeley...

Surrounded by strange and unusual happenings from the moment he was born Sam has translated those experiences across more than two decades of publishing into both story and art.

His unique perspective on the world about us has featured in many publications including Peter Johnstone's 'Just add water', James Boswell's 'Weird City' and Paradox Press's award winning 'Big Book of Urban Legends'.

As an illustrator he has produced posters for Black Box Merseyside Ltd. theatre productions, adapted the Five Star Theatre's production of Flywheel, Shyster and Flywheel for the BBC into comic strip form, contributed to and produced promotional materials for varied clients from animal charities to the music and festival industry.

His life long love of myths and legends is currently being distilled into an art based adaptation of the Red Book of Hergest.

Beyond his varied roles in publishing Sam has sold chocolates and beers in the Lake District, worked for Royal Mail, has been a roadie, event manager, studied with druids, climbed Mount Snowdon with a broken back and driven a Nitrous Oxide boosted race car at over one-hundred and twenty kilometers an hour with a flat tire.

Sam is a self-confessed techno-nerd, when not putting pen or pencil to paper he can be found surrounded by electronics and computers repairing or finding innovative uses for them. His little wolf pack takes him for regular walks in the local countryside when they feel Sam has been working for long enough on his varied creative projects.

You have subscribed to alerts for Sam Madeley.

You have been added to Sam Madeley's favorite list.

You can also sign-up to receive email notifications whenever Sam Madeley releases a new book.