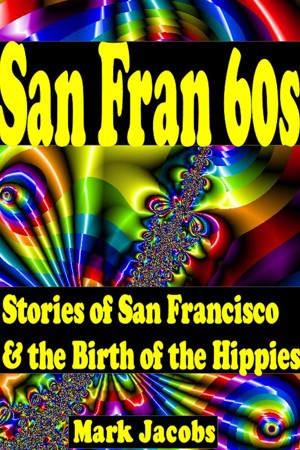 San Fran '60s: San Francisco and the Birth of the Hippies

“It's fun, with a quirky style… There's plenty of colour evoked and the language has a brisk and bold rhythm. There's an authenticity, an authority…” Simon Warner, PhD, author of Text, Drugs, and Rock'n'Roll, published by Bloomsbury, and Lecturer, Popular Music Studies, University of Leeds, UnitedKingdom

“In San Fran ‘60s, Mark Jacobs brings the counter-culture of San Francisco in the 1960s to life through a sharply drawn collection of stories, which are frequently disturbing and surprising. Jacobs creates a montage of images and moments that capture the beat, sound and smell of the streets. Many of his characters are in search of truth or love—or at least release from the world around them--whether it’s dodging the draft, coping with drug addiction, treading the fine line between madness and mysticism, or finding the last barber on Haight Street. This is an engaging half-forgotten world of couch nomads, hipsters and the dispossessed in search of something that they themselves can’t articulate … I really loved this collection.” Douglas Field, PhD, lecturer in 20th Century American Literature at Manchester University, United Kingdom and a regular contributor to the London Times Literary Supplement. He is the editor of American Cold War Culture (2005) and the author of James Baldwin (2011)

“It is a very good portrait of a period.” Richard Olafson, editor of Pacific Rim Review

“It's entertaining to read. It condenses a complex reality into a fictional landscape that captures some of the rosy and bitter flavors of a time that continues to be mythologized.” Nadya Zimmerman, author of Counterculture Kaleidoscope: Musical and Cultural
Perspectives on Late Sixties San Francisco,teaches at Cornish College of the Arts in Seattle

“This book does an unbelievably good job of capturing the feel of the 60s. The pace is perfect. The rhythm is perfect… And some of the images are searing - they stick with you for days after you read them.” Phil Kain, Phd, author of Nietzsche and the Horror of Existence, Professor of Philosophy, Santa Clara University

“I... found it very readable. It certainly brings back the era with an inside look. I think it could find readers in Germany.” Juergen Ploog, “Germany's last beatnik poet,“ novelist, author of Facts of Fiction. Essays on Contemporary Literature.

“Captures a particular time and place and youth very well.” Jennie Skerl, retired Associate Dean of the College of Arts and Sciences at West Chester University, author of William S. Burroughs (Twayne, 1985) and Reconstructing the Beats (Palgrave Macmillan, 2004). She is a founding board member and former President of the Beat Studies Association (USA).


And it all really happened. The stories are based on the experiences and voluminous journals of author M.W. Jacobs. He has lived in San Francisco and environs since 1965 and presents himself, friends, and acquaintances as prime specimens. He wrote for the underground press in the Sixties, published regularly in the mainstream press in the Seventies, and had a book published by Doubleday on American cartoonists in the Eighties. Jumping Up and Down on the Roof, Throwing Bags of Water on People is still available on Amazon. He is now a retired English teacher living half of the year in Oaxaca, Mexico.

San Francisco was Ground Zero for the emergence of the hippie movement, and this is one participant's experience at street level. In this fictionalized autobiography, Jacobs captures the underpinning of drifting and despair and cuts through the mass-media stereotypes, which he deftly critiques. Here, Haight Street can be the last resort when looking to fill an open day. And from the outset, there are the zombies and burnouts, boredom and paranoia, and a host of uptight realities. Not everyone gets laid regularly, either, but there is plenty of drug dealing and usage. Something definitely intense is driving these refugees from the suburbs and points beyond. It's not all peace and love, either.
Any storyline tangles once the chapters start jumping away from chronology and, at times, from Haight-Ashbury. Characters who were written out of the story suddenly reappear, while others are added willy-nilly.
The mobi formatting keeps shifting between two typeface sizes, and I found that as annoying as the grammatical errors and storytelling redundancies. There are also continuity issues, such as the sudden assumption the reader already knows about ex-lover Amy when she's first mentioned and then vanishes.
Caught mostly in 1966-'67, the book is an important acknowledgement of the grim underbelly of a counterculture beginning to spread across the rest of the nation – excepting, as we're repeatedly told, the South and other redneck enclaves.

You have subscribed to alerts for M.W. Jacobs.

You have been added to M.W. Jacobs's favorite list.

You can also sign-up to receive email notifications whenever M.W. Jacobs releases a new book.