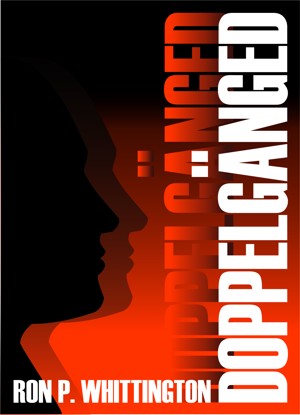 By Ron Whittington
After scientist Dr. Rishikesh Singh and his wife survive a plane crash in India, the injured doctor becomes a recluse and his company and foundation take a turn from neurological research into the realm of virtual entertainment. H.I.4 calls in Parker Glynn to infiltrate the Singh Foundation and determine if the doctor is still mentally competent or if a doppelgänger, a double, has taken his place. More
In the sequel to Second Strike, novelist Ron P. Whittington weaves another fast-paced thriller filled with interesting characters, true-to-life settings and an imaginative plot sure to satisfy the most discerning readers.

“Whittington has crafted a chilling thriller with a resourceful and intelligent protagonist. Doppelgänged gets into your head like the story’s wickedly clever device promising instant happiness, but delivering deadly results. Hang on for a wild ride.” - Parker Francis, author of the Quint Mitchell Mysteries

“Doppelgänged is a well-crafted thriller that will keep you engaged throughout and leave you longing to continue the Parker Glynn saga.” - Drew Berquist, former U.S Intelligence Officer and Author of The Maverick Experiment

“Parker Glynn is tasked with uncovering the truth behind an experimental device designed to fulfill one's deepest desires but soon finds himself fighting for his life. Fans of suspense will enjoy Doppelgänged, which takes readers on an exciting trip into a world rife with intrigue, conspiracy and lust.” -Alison Trinidad, Jacksonville Magazine

Over the last 20 years, Ron Whittington has worked as a ghostwriter on two national best-selling books and his freelance writing has appeared in Texas Business, Texas Monthly, Water's Edge, Jacksonville Magazine, Beson Publications, and The Florida Times-Union.

A native of Atlanta, Whittington started his career as a journalist with CNN Radio and the Dallas-Fort Worth Business Journal before going into the public relations profession. He has served as the media spokesman for the Dallas Chamber of Commerce, Dallas Area Rapid Transit, the Metropolitan Atlanta Rapid Transit Authority and Atlanta Committee for the Olympic Games, JEA (Jacksonville Florida’s municipal utility) in addition to work as an independent public relations consultant. He is currently a senior account executive for the southeast U.S. regional office of London-based Mulberry Marketing Communications.

You have subscribed to alerts for Ron Whittington.

You have been added to Ron Whittington's favorite list.

You can also sign-up to receive email notifications whenever Ron Whittington releases a new book.