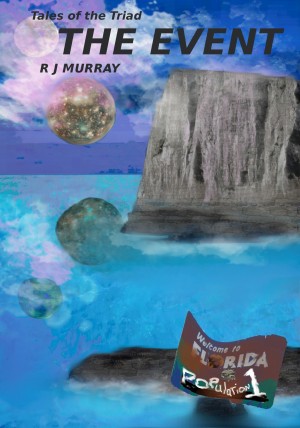 The Event - Tales of the Triad, Book One

R J Murray was born on a small farm in central Kentucky in the early fifties. Growing up in the country gave him a love of nature and a dislike of shovelling manure, as well as the certain knowledge that goats were smarter than dogs and cows were dumber than rocks.
After moving to Florida with his family, he returned to Kentucky each summer with his siblings and first heard about organic gardening as a teenager. Manure finally had a purpose. Winters were spent attending school on Florida's east coast and he returned to Kentucky after graduating from High School in 1969, where he got a job flipping burgers while he attended the local branch of the University of Kentucky. His free time was spent reading Science Fiction from the Golden Age, hunting, fishing and gardening. Hobbies have included history, spelunking, geology, as well as many different home crafts such as cross stitch, leather work, making mail armour and baking. At age fifty-nine, he accepted a challenge from his wife. (With your wild imagination, it should be easy for you.)
He wrote his first novel in fifty eight days, changed the title many times, and ended up with a manuscript of two thousand pages which eventually became the first books in the series, Tales of the Triad.

Also in Series: Tales of the Triad

To be honest, first time thru (gone thru the full series twice and contemplating a third time) it was a tad bit hard to understand what was going on, but that only lasted about 100 pages, very glad I got thru and into the bulk of the story. It read like a very well edited movie. As a video editor, I can qualify this!

You have subscribed to alerts for R J Murray.

You have been added to R J Murray's favorite list.

You can also sign-up to receive email notifications whenever R J Murray releases a new book.