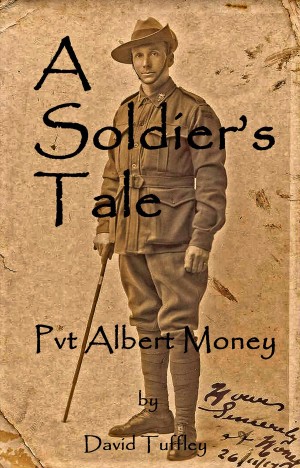 A Soldier’s Tale: Albert Money at the Battle of Aubers Ridge, May, 1915

By David Tuffley
Rated 3.00/5 based on 1 reviews
First-person account by British Army Private Albert Money of his experiences in one of the bloodiest and most futile battles of World War 1. Seriously wounded by machine gun fire he spent hours in No-man's land lying in a muddy ditch surrounded by the dead and dying, eventually crawling back to the British trenches. Casualties for the day, 10,000 men. Territory gained, not a single inch. More
I present this first hand account by my maternal grandfather, Private Albert Money (5537), of the King’s Royal Rifles. The cover photo was taken November 1917 after spending several hospitalised years in France, Britain, and Australia, recuperating from his wounds, hence the Australian, not British Army uniform.

Albert was born around 1885, a younger son of a Northamptonshire farming family in England. With no prospects of inheriting the farm, Albert joined the King’s Royal Rifles Corps around 1905 when he was still a boy of 16. Thus he became a professional peace-time soldier in a Regiment known for its overseas activities. The King’s Royal Rifles had been raised in the American colonies in 1756 as the 62nd (Royal American) Regiment. Their reason to exist was to defend the British colonies against French incursions.

Much of his five years service was in the Americas. It is said that he became a good swimmer while stationed in the West Indies, what would now be called the Caribbean. Albert left the Army around 1910 and emigrated to Australia, becoming a bridge carpenter in the employ of Queensland Rail at a time when new train lines were being built throughout the State.

When the First World War started in 1914, the British Army launched a recruitment drive. Experienced soldiers like Albert were encouraged to re-enlist. So he answered the patriotic call and returned to England, becoming Private Albert Money KRR once again. He was about 25. At this time, it is unlikely that he or his comrades had any real concept of the horrors that awaited.

An interesting, very short account of an English soldier's experience in World War I. In his first charge across no man's land he is hit a couple of times and lies in a ditch among the dead and dying. It's written in a detached style so one doesn't get much of an emotional connection to the soldier's suffering.

You have subscribed to alerts for David Tuffley.

You have been added to David Tuffley's favorite list.

You can also sign-up to receive email notifications whenever David Tuffley releases a new book.