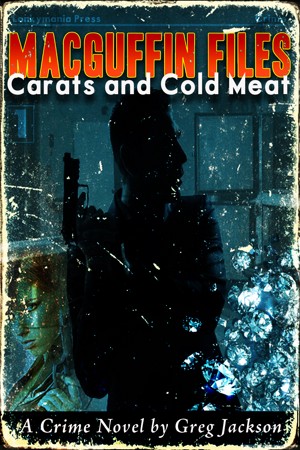 By Greg Jackson
Thomas Foolery is a man living in his own world,
surrounded by fictional, televised tales, scripted worlds of crime and endless Hitchcock marathons.

He's unfit, he smokes like a chimney and sees
nothing wrong with his voluntary agoraphobia. He's living life on his own terms...and under the watchful eye of his therapist.

Until he sees a flaw in a major crime, which he has to rectify! More
Thomas Foolery is a man living in his own world,
surrounded by fictional, televised tales, scripted
worlds of crime and endless Hitchcock marathons.
He's unfit, he smokes like a chimney and sees
nothing wrong with his voluntary agoraphobia. He's living life on his own terms...and under the watchful eye of his therapist.

Angie Earhardt is the only person Thomas truly trusts, even if there are ulterior motives to his dedication to therapy. When she tells him that there's more to life than selling online collectibles alone, Tom starts to open up.

And when he sees a critical flaw in the rolling footage of a major crime breaking, he decides to take Angie's advice and journey out into the world and live out his fantasy...being at the center of an elaborate mystery.

Adopting the alias...Matt MacGuffin and with his unending knowledge of fictional skills, he embarks on a dangerous journey into the real criminal underworld, where his life...and Angie's, will be pushed to their limits and hang in the balance.

Matt and Angie learn quickly to trust no one, humidity sucks and you should never, ever vomit on a corpse.

Will Matt survive in this world, where all of the players are cold and the cadavers are much, much colder? Find out in this darkly twisted, darkly comic crime novel!

Greg Jackson is a freelance writer, author, artist and graphic designer. He is the author of eight novels and counting. Ever since he was a kid Greg's wanted to be a writer. His imagination is always on overdrive, courtesy of growing up as a child in the Star Wars generation. There rarely is an idea that can't be turned into a plot, no matter how odd. He decided to work from home as a graphic designer to raise his son as a single parent. He soon began his writing in 2007. Operation Mistletoe was his first novel and soon every shipment in Waldenbooks sold out over the Christmas season in the upper northwest region.

Greg's books span several genres of fiction, from science fiction and flash fiction short stories to bitingly sarcastic satires. He publishes several online stories to Authors Den and owns lankymania.com, where he accepts and lists books from other independent authors to promote independent writing by sharing exposure to fans.

Greg's imagination is still on hyperdrive and his love for movies is still going strong. His books have been said to read like movies and it only reaffirms what he loves to do: entertain and inspire through imagination. And no matter what, he's inspired his son to start writing and telling stories, which is possibly the best thing that can ever happen.

You have subscribed to alerts for Greg Jackson.

You have been added to Greg Jackson's favorite list.

You can also sign-up to receive email notifications whenever Greg Jackson releases a new book.