By Jamie J. Buchanan
Rated 3.80/5 based on 5 reviews
From the upcoming anthology of short stories "Insights". Diane had to watch her words around Gina, especially after the incident. But what she saw in the photo took her breath away.
Download: epub mobi (Kindle) pdf more Online Reader
rtf lrf pdb txt
Price: Free! USD
Add to Library
Create Widget
Tags: horror family ghost invisible photo
About Jamie J. Buchanan

Jamie J. Buchanan is based in Perth, Western Australia. He spent many years playing in rock bands, mostly loud, fast, punk rock and heavy metal bands - the sort your parents warned you about. He is currently playing guitar, singing and writing songs for melodic punk band “Incomplete” based in Perth, Australia. But he has always been writing stories - long and short.

Jamie has had a short story “On My Goat” published by Cardigan Press in 2006 in the anthology “Allnighter” as well as having several short stories published on the Smashwords website for free download (www.smashwords.com).

The short story “Sanguine Saviour” won second place in the monthly “Darker Times” competition (www.darkertimes.co.uk) and was included in the inaugural Darker Times anthology as well.

The short story “The Woman on the Pavement” is published in an upcoming Editor’s Choice anthology by Stringybark Press called "Hitler Did It".

Jamie's short story "Battle of Wits" has won the Raspberry and Vine short story comp for 2012 - you can read it here:
http://home.people.net.au/~raspberryandvine/

Jamie has had several stories short-listed as well including “Insights” in the 2013 Carmel Bird Short Story Award and “Imagine This” in the 2014 Bundaberg Writers’ Writefest Award 2014.

Jamie enjoys the films of Robert Rodriguez, The Coen Brothers and Guy Richie, music by Bad Religion, Muse, The Offspring, Clutch, Red Hot Chili Peppers and Metallica, and books by James Ellroy, Irvine Welsh, Chuck Palahniuk and Stephen King. His only hates are people who talk about themselves in the third person. And Brussel Sprouts. He hates Brussel Sprouts. 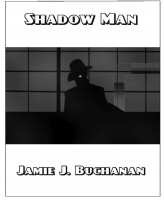 Not overly good or bad

A good flash fiction that I enjoyed reading.
This author has a great imagination.
Unfortunately there are a lot of 'would be' critics out there that target free books.

I absolutely loved it!

slow start, true - but wow! once it gets going! exactly my kind of story! quibbles here and there but nothing egregious.

This is a reasonable enough story but I didn't think it was told very well. Every fact is clearly spelt out, there's no attempt to make the reader piece the information together from the characters' words and actions.

The opening sentence clumsily uses the word "room" twice. The following sentence tells is it is Diane's first visit to Gina's home since a life-changing accident. Why not omit this nugget of information and keep the reader guessing as to why Gina's room is no longer immaculate (as the next paragraph relates in detail)?

Then, despite neither of the characters wanting to dwell on the tragic events, the photo album gets whisked out so that they can pour over the past, and so that the plot can progress to its main raison d'etre.

Rather than two characters who (by the plot's admission) are little more than loose acquaintances who clumsily fall into a discussion about a tragedy, I'd have thought this story would have far more bite to it if Gina was refusing to come to terms with her loss and Diane was a close friend or relative who was, out of concern, forcing Gina to open up, and maybe getting them both to look at the photos for the first time as part of the healing process.

'The Photo' needs to be developed...

You have subscribed to alerts for Jamie J. Buchanan.

You have been added to Jamie J. Buchanan's favorite list.

You can also sign-up to receive email notifications whenever Jamie J. Buchanan releases a new book.