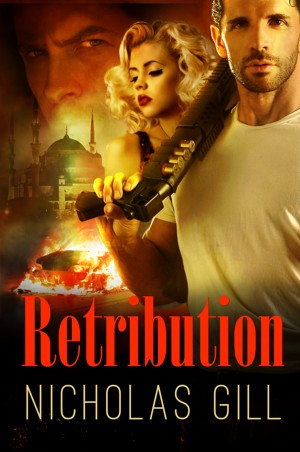 By Nicholas Gill
Rated 5.00/5 based on 7 reviews
A small survivor of a brutal massacre becomes the leader of a terrorist splinter group intent on attacking soft targets in the west. The novel develops into a detective story to find the brains behind the attacks and into a clandestine operation to exact "retribution" for the evil done, but the terrorist agenda is not complete, a much larger plot with grave effects for the western nations begins. More
When a terrorist splinter group carries out a series of attacks on the west, an American intelligence analyst becomes involved in events far more closely than he could ever have imagined. Forced to witness a brutal murder at close quarters, and even closer to home, he vows to exact “retribution” - whatever the cost.
The analyst becomes the catalyst in unfolding actions, and the novel becomes both a detective story to track the mastermind and an action thriller to take out the terrorist organization. Events build to a catastrophic climax; can an international crisis be averted? Can an elusive urban guerrilla be tracked and stopped? What will be the cost?
Fast paced and international in scope, this is the first novel in a series built around a set of realistic characters immersed in extreme circumstances. Technically accurate and well researched, this series of novels takes us into the world of ex special forces operatives’ now working in. the private sector.
These characters have taken on a life of their own and will become involved in many future adventures.
Read and enjoy,
Nicholas Gill.
Download: epub mobi (Kindle) pdf more Online Reader
rtf lrf pdb txt
Price: Free! USD
Add to Library
Create Widget
Tags: action adventure antiterrorism special forces thrillers international action revenge thriller suspense action thriller
About Nicholas Gill

Author Profile – Nicholas Gill.
As a young man the author served in the Royal Marines Commandos seeing active service in Malaya, Borneo, Brunei, Sarawak and Aden. In between active service postings, specialist courses and training included arctic warfare training three hundred miles inside the Arctic Circle in northern Norway, and desert warfare exercises in Libya and Western Australia. On leaving the Royal Marines he went back to his roots in engineering and worked in the power industries on refinery and power station construction projects. This led to involvement in the onshore construction of jacket and modular units for the emerging North Sea oil industry. A natural follow on from this was to work offshore on the hook-up and commissioning of major production platform installations.
Planning for retirement involved the purchase and renovation of a derelict farm in Wales and ultimately the purchase of twenty-seven thousand acres of the Black Mountain. This proved expensive and returning to the offshore oil industry the author spent a further twelve years on the development of a major North Sea Field for a large American Oil company.
On the termination of his contract the author found that he had passed his sell by date and no one wanted or needed his years of experience. Having spent many years writing engineering procedures and specifications it occurred to him that he was perfectly suited to becoming a best selling author! "Retribution" is the first fruit of that idea, and is the first part of a planned trilogy; it is available FREE from Smashwords. The second part, "Sedition", is now published with Smashwords, and the third part, "Attrition", is complete and was published with Smashwords in the last quarter of 2013. Six more novels are planned in detail and will use many of the same characters in further adventures.
Read and enjoy,
Nicholas Gill.

One of the best action novels ever!

Great read!!
I enjoyed the way the story unfolded via the day diary. Incredible details of weapons and intelligence activities made the story very believable. The character relationships nicely balanced the typical bravado spy action tales.
I look forward to reading the next book in the trilogy.

The story centers on a CIA agent that while on the trail of a new terrorist group ends up having a close encounter of the worst kind that sets him on the path of Retribution.

I discovered the book on twitter from the author as he was promoting free copies. I picked up the book and enjoyed it so much that I went over and bought a copy because I always want to

The cast of characters of this story are brought together after being effected by a series of terrorists’ attacks. The terrorists’ goal is the destruction of both the west and Israel. After multiple

brings about the ultimate betrayal.

There is just one hit after another in this story. The bad guys are hunted and while they get what they have coming the good guys don’t escape unscathed.

This is the debut novel of an indie author and the first in the series. It's well known that authors get better with each book and if this is any indication of what is to come from Mr. Gill then we as

thriller readers will be very happy to have a new series to feed our thirst.

Retribution is a great story! The plot is very exciting and believable. The characters are fascinating and their conflicts and strategies provide edges-of-your-seat excitement. I highly recommend this novel. I also read the next book in this series Sedition. I loved it too.

This was I-could-not-put-it-down novel. It was exciting, timely, believable, and very fast paced. I found it as enjoyable as any of the Clancy novels I read. The timely coverage of terrorism and its roots is gripping. As one reads the novel, you just know this kind of thing is going on right now. For an entertaining thriller, I highly recommend "Retribution". It's addicting.

Wow! Action packed thriller, literally couldn't put it down. The author's broad scope of knowledge regarding geography, intelligence agencies, weapons etc. is truly first class. Can't wait for the next one!

A first-rate thriller with a compelling story. Grabs you from the start and takes you on a roller-coaster ride. Great characters and utterly believable scenarios from an author with real insight into the world of special forces life. Forsyth with better characters, Clancy with better plots - what more could you want? Gill could be the best new thriller writer in years. Hopefully he'll keep them coming.

You have subscribed to alerts for Nicholas Gill.

You have been added to Nicholas Gill's favorite list.

You can also sign-up to receive email notifications whenever Nicholas Gill releases a new book.