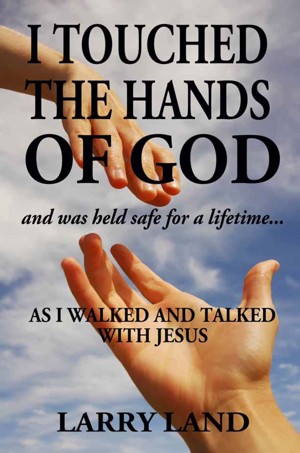 I grew in Divine Grace with Sanctification at a very early age as a Christian, with a lifetime commitment to the Lord in the resurrection and regeneration of life without hesitation.

As I walk this endless journey of life and thru the ever-changing Sands of Time, the Lord is with me, close at my side.

Read this book and you too can learn and experience the love of God, Jesus Christ and the Angels; they will give you courage, belief and above all protection by guidance and direction. Place your trust in God through prayer and reverence, with the Grace of the Lord, you too can be held safe in his loving hands.

Jesus sayeth; Come unto me, all ye that labour and are heavy layden, and I will give you rest. Matthew 11-28

Larry Land was born on March 8, 1941 in Denver, Colorado . His life has been filled with near death experiences and he feels he was touched by the hand of God because he has survived them all. Some of his brushes with death include:

• 1942 — he nearly died from a bacterial infection when he was just a year old.

•1972 — he found out his land and water supply had been contaminated by chemicals leaching from the Rocky Mountain Arsenal.

• 1984 — he was the victim of a hit and run and had an out of body experience. Doctor's all said his survival this time was a miracle of miracles. He had lost all memory, couldn't talk, walk, or use his arms but through God's supreme power, a Divine intervention occurred restoring Larry's life.

•1998 — he experienced a deadly Asthmatic attack that left him helpless in the middle of a huge parking area at Pike’s Peak.
“I realized I was entering the final stages of a deadly attack,” Larry says. “As my eyes closed, I heard this booming voice say, ‘Fear not my Son, I am with you.’ Then suddenly a great golden illumination appeared from within the clouds. God appeared to me saying, “I am the Resurrection; I am the Life. Rise up, my Son.’ As I reached upward with both my hands, I saw God's arms reaching toward me. I put my hands in his and he said, ‘Rise up my Son, for you are Saved.’

“The grip became tighter as God pulled me to my feet and said, ’Your work on earth is not yet done.’ After this, I was able to breathe normally. The white cloud began lifting and with my arms outstretched I could feel God's grip letting go.
“I slowly returned to normal and went on to meet the rest of my family.’

Larry documents these experiences in his books, “How I Reached Up and Touched the Hands of God” and “Held Safe in the Loving Hands of God for a Lifetime … as I Walked and Talked with Jesus.”

Please watch for Larry’s new book to be released in 2013, "To Heaven and Back With a Message." That message is one he didn't know how to deliver to the world until recently. God showed him the way.

You have subscribed to alerts for Larry Land.

You have been added to Larry Land's favorite list.

You can also sign-up to receive email notifications whenever Larry Land releases a new book.