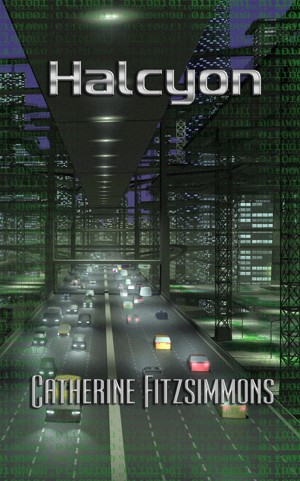 By Catherine Fitzsimmons
A computer virus that infects cybernetic implants with unstoppable force has plagued people for ten years. A military-funded project to create an antivirus fell apart, and humanity’s best hope rests with a ragtag group of programmers and visionaries struggling to pick up where the lead engineer for the project left off. But the virus isn’t the only thing standing in their way. More
What can you do when a computer virus starts infecting people?

For years, a virus that targets cybernetics has plagued people with any sort of computerized implant in their bodies. It is untraceable, unpredictable, 100% fatal and infecting more people every day.

Politics tore apart Project Requiem, a highly-funded military endeavor meant to create an antivirus to save humanity. A ragtag group of programmers and visionaries is trying to pick up where the lead engineer for Requiem left off, but their resources are limited, they’re hounded by the army and corporate mercenaries and a key engineer with the only remaining copy of the antivirus is missing. As the virus grows more powerful by the day, all they can do is hope that they can finish before it becomes powerful enough to attack the entire city at once.

A perpetual temp who has worked for a number of evil empires, Catherine pours her energy into entirely too many hobbies. She lives outside Toronto, Ontario with her husband and a black Himalayan with a penchant for sliding into walls. For more information about Catherine, please visit her blog.

You have subscribed to alerts for Catherine Fitzsimmons.

You have been added to Catherine Fitzsimmons's favorite list.

You can also sign-up to receive email notifications whenever Catherine Fitzsimmons releases a new book.