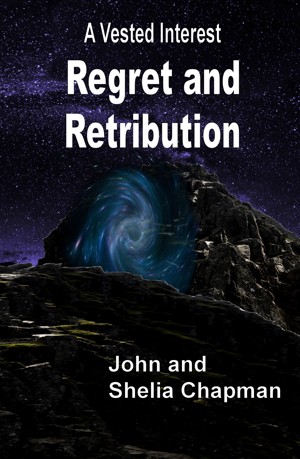 Book 6 in the series. With the Atlantic Ocean between them, Donna never expected to see Jared again. After Donna passed through a portal between continents she was surprised to find Jared and a ten year old boy waiting. The boy was her son, and he wasn't supposed to be born yet! Teleportation and time travel were just the beginning however, next comes telepathy and possession by a hostile alien. More
Book 6 in the 'A Vested Interest' series.

Eight years ago their hands touched and their worlds stood still. Jared Thundercloud understood the attraction between them. It was one he'd searched and longed for, one he thought he'd already found. He was committed to another, yet this person in front of him was his other half, of that he had no doubts. He made a decision to honour his commitment and severed all connections with his perfect match.

Four years later Jared held her in his arms. Life was everything he wanted it to be. There was love in her eyes, he could see it. Why did he make such a stupid mistake? How could he have been so insensitive? Realising his mistake, he went back, but she wasn't there. Jared tried, but he couldn't find her. It was as if she'd disappeared off the face of the Earth. Another year later, he's told to be in a specific place at a specific time or lose his last chance to be with her.

With the Atlantic Ocean between them, Donna never expected to see Jared again. When he stepped out of the cave at Spirit Canyon, she couldn't believe her eyes, but now the tables were turned, and Donna was pregnant. What was he going to do? Walk away? Lose her again? He cursed the very thing that kept bringing them together - Fate.

We started the 'A Vested Interest' series in 2007 and it took over a year before I came up with an ending we were happy with. At 170,000 words A Vested Interest was too long though for a printed book. We cut it heavily but still ended with a 140,000 word book. There was no alternative, we had to split it into a two book series. Doing that, we thought, would allow us to put back some of the content we had cut and expand the second book (Dark Secrets) a little.
Well that was the plan. We ended up splitting the second book and making a trilogy by adding 'No Secrets'. The original ending didn't quite fit now so we moved it into a fourth book - Stones, Stars and Solutions.
And so it goes on. We are now writing book 10 and 11 of the series. Shelia has written a spin-off 'Blood of the Rainbow' trilogy. Altogether it's 2 million words so far! In terms of time, we've only covered a few months. There is an end in sight but not for another 5,000 years. Maybe I'll get to use my original ending then?

About the Authors
John and Shelia Chapman are a husband and wife team who met on Internet and crossed the Atlantic to be together. John, an English ex-science and computer teacher contributed the technology and 'nasty' bits while Shelia drew on her medical experience in the USA and produced the romance. The humour? That came from real life.

Also in Series: A Vested Interest

You have subscribed to alerts for John Chapman.

You have been added to John Chapman's favorite list.

You can also sign-up to receive email notifications whenever John Chapman releases a new book.