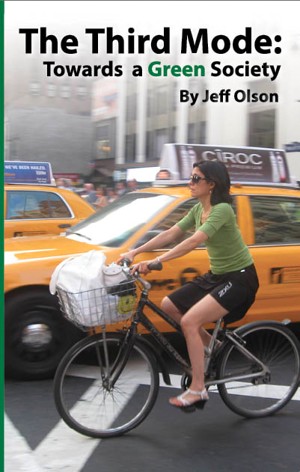 The Third Mode: Towards a Green Society

Jeff’s lighthearted stories bring readers around the country and across international borders, and chronicle the crushing disappointments and triumphant victories associated with developing the mobility solutions and communities of the future.

The Third Mode then goes a step further to explore the notion that the kind of thinking required to integrate the Third Mode into our modern world represents an entirely new perspective, a thought process that can not only be used to fix our transportation system, but one that can also be applied to all complex issues where the solution is not clear.

Jeff Olson is an architect and planner who has been involved in greenways, open space, active living and alternative transportation projects for more than 20 years. He has had a diverse career with experience in the public, private, and non-profit sectors. His unique vision and leadership ability are important assets to projects ranging from regional planning to site specific projects and programs. He is an avid bicyclist and skier who has the perspective of a parent with three young children.

From 1998-2001, Mr. Olson served as Director of Millennium Trails, an award winning initiative to create a national network of trails as part of America's legacy for the year 2000. The Millennium Trails partnership was supported by the White House Millennium Council, the U.S. Department of Transportation, American Express Company and a "Green Ribbon" panel of national leaders. From 1993-98, he served as the New York State DOT Bicycle and Pedestrian Program Manager and supported the development of the 1,000 mile state bike route system, the 350 mile New York City Greenways system, the Erie Canal Trail and the Hudson Valley Greenway. He teaches America’s first university course in bicycle and pedestrian planning, and is Co-Director of the SUNYA Initiative for Healthy Infrastructure, which creates model plans connecting public work with public health.

Reviews of The Third Mode: Towards a Green Society by Jeff Olson

You have subscribed to alerts for Jeff Olson.

You have been added to Jeff Olson's favorite list.

You can also sign-up to receive email notifications whenever Jeff Olson releases a new book.