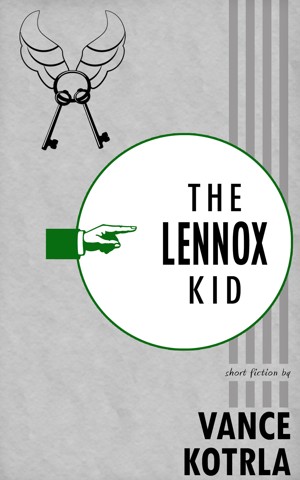 By Vance Kotrla
Rated 5.00/5 based on 1 reviews
In this short story, a lawyer pressured into defending a rich kid caught driving drunk gets a visit from his concience. Whose name is Larry. More
This imaginative and touching story takes the idea of an angel on your shoulder one step farther, and illuminates the hidden world of spiritual bureaucrats secretly responsible for our consciences, memories, egos, pride, and the rest. Under normal circumstances, humans are never supposed to learn the truth, but Larry's had a couple of big slip-ups before, and desperate times call for...improvisation.

Vance Kotrla is a writer and musician living in Los Angeles. He is the singer and songwriter for the independent folk band Sci-Fi Romance. His last name is Czech, which is why it and vowels seem to have had a misunderstanding. (It's pronounced as though it had another "o" in it).

Vance has written for film, print, and digital outlets, and blogs regularly about obscure and cult movies.

He is a native of Houston, Texas.

Many may remember hearing me rave about Sci-Fi Romance and their new record The Ghost of John Henry. Lead Singer/Songwriter of the band, Vance Kotrla, has recently released a short story entitled “The Lennox Kid” and in terms of versatility, presents a fantastic story of human essence, it’s animated parts and just how lively they can be.

As the story opens, Taylor Lennox – “twenty-one, twenty-two” – has hit a man with is car, and to make matters worse, he’s a bit tipsy. In steps David Pollock, the lawyer who will be representing him; also through the door, a unique premise walks in with him. The story transitions to David, and his moral journey as he meets a man named Larry, who turns out to be his conscience. On a trip down memory lane, revisiting moments where his conscience helped him out in certain places, Larry is looking for help, he wants David to drop this case, and as it turns out, he’ll stop at nothing to make that happen.

Kotrla creates an intriguing K. Dick type world, where various parts of our personality, including conscience, memory, and ego actually live incarnate. As the story closes we get a view of that world, it’s bureaucracy and it leaves the reader craving more of that perspective. Bureaucracy, at various points on the ladder, is worse at certain levels than others, and Larry, through an unfortunate event, does something extreme to prevent from falling down that ladder. Kotrla’s world is oddly reminiscent of “The Adjustment Bureau” meets Michael Connelly’s Mickey Haller, with the focus more on the “AB’s” players. Kotrla does a great job of playing up David’s story, putting the focus on him, while Larry’s sneaks up as the story progresses.

A writers greatest accomplishment is leaving the reader wanting more, and this is a story that lives up to that nature. Kotrla’s versatility into prose and dialogue is more than just an achievement, it’s high quality. Something you’d certainly expect from an established wordsmith. Vance cut’s through the tropes and faults of first time story tellers and brings you a bite size, thought provoking appetizer, seasoned perfectly, and just the right portion size to wet the reader’s appetite. Short stories are, in many ways, that quick fix, whether it’s coffee, soda; sugar and caffeine, they come with their own set of withdrawal symptoms. Stories have the ability to do the same, and with Vance Kotrla the same fits. I want more.

You have subscribed to alerts for Vance Kotrla.

You have been added to Vance Kotrla's favorite list.

You can also sign-up to receive email notifications whenever Vance Kotrla releases a new book.