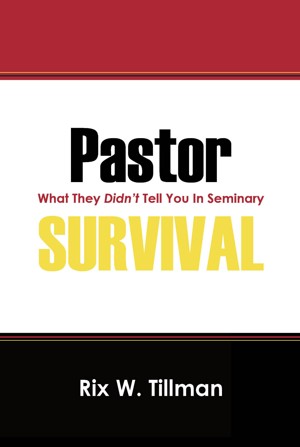 Pastor Survival: What They Didn't Teach You in Seminary!

By Rix Tillman
A pastoral veteran nearing retirement looks back over 30 years of ministry and deftly articulates how to survive and finish strong in the Christian life. Packed with helpful and practical “Do’s and Don’ts” suggestions for every church pastor.

Now retired, Dr. Tillman was honored by The El Paso Alumnae Chapter of Delta Sigma Theta Sorority as 2008's Outstanding Community Honoree for his work in reaching out to people of all races and ethnicities. He is past president of the Southern Baptists of Texas Pastor's Conference (2004-2005), and Immanuel Baptist Church, where he pastored for 16 years before retiring, was recognized as one of the top 100 churches in the SBC in baptisms as well as a leader among all churches in reaching young adults between the ages of 18 & 29. During his pastorate, Immanuel was recognized by the Billy Graham School of Evangelism as in the top 1.5% churches in the Southern Baptist Convention in evangelism, and a top church in Texas for its size in baptisms. Immanuel also led the entire area in missions giving for all SBC churches in both per capita and total giving. Pastor Rix was born and raised in Pocatello, Idaho, and did not come to know Christ as Lord and Savior until the age of 26. Pastor Rix came to Exciting Immanuel in December, 1994, after serving seventeen years as associate pastor in literally every area of ministry, including: minister of music & youth, singles, evangelism, education, and assistant pastor. When he came to Immanuel 13 years ago, the average age of church members was 66, and now it is about 34! Before entering the ministry, Pastor Rix was a high school band director and coach for eleven years. He was called to full-time church staff work in 1978 at the First Baptist Church of Las Cruces, New Mexico as Minister of Music and Youth. In 1980, he became an associate pastor at First Baptist Church of Albuquerque, New Mexico. During five years in Albuquerque, Pastor Rix served as minister to students, then evangelism and singles pastor. In August of 1984, he was called as Associate Pastor of San Jacinto Baptist Church in Amarillo, Texas and served there for eight years. After serving as Minister of Education of the First Baptist Church of Pearland, Texas, Pastor Rix accepted the call as Senior Pastor of El Paso's Exciting Immanuel Baptist Church. His education includes a Bachelor of Music Education and a Master's of Art in Education from Idaho State University; Master of Ministry and Doctor of Ministry from International Seminary in Plymouth, Florida (The only non-traditional seminary approved by the Pentagon for the military chaplainry). He and his wife, Sally, have been married for 47 years and have two grown sons, Rix Thomas, Minister of Music at First Baptist Church of Conroe, Texas; and Mark David, founder of the Tillman-Batanzos Law Firm in Dallas, Texas; two daughters-in-law (Marcia, an attorney in Conroe, and Kristie, a Christian photographer and homemaker in Dallas) and four grand-daughters, Sarah, Kimberly, Elise, and Julia.

Reviews of Pastor Survival: What They Didn't Teach You in Seminary! by Rix Tillman

You have subscribed to alerts for Rix Tillman.

You have been added to Rix Tillman's favorite list.

You can also sign-up to receive email notifications whenever Rix Tillman releases a new book.