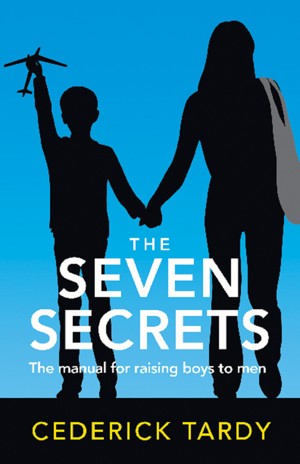 The Seven Secrets of Extremely Successful Mothers: The Manual for Raising Boys to Men

By Cederick Tardy II
The Seven Secrets of Extremely Successful Mothers is a comprehensive how-to guide for creating an interdependent relationship with your son that empowers him to mature into the man he was destined to become. Do not risk raising another 30-year-old boy. Learn the seven secrets successful mothers have used throughout history to raise confident, classy, funny, intelligent, and visionary young leaders More
The Seven Secrets of Extremely Successful Mothers

The purpose of this chapter is to explain the importance of self-confidence when faced with challenges as a mother. The author provides examples of success mothers who battled through extreme difficulties and managed to raise extremely successful men. The chapter concludes with an action challenge designed to push the reader beyond their comfort zone.

In this chapter the author hypothesizes some mothers have put off going the extra mile in leading their family due to their higher needs going unfulfilled. This chapter provides relevant information and resources for support with ten of the most basic human needs.

In this chapter the author helps mothers understand the intricate nuances involved in communicating effectively with their young man. The author explains why some mothers are more effective and influential when talking to their sons than others. This chapter offers exhaustive guidance for understanding the listening, learning, and communication styles of most people and the role they play in the mother and son relationship.

The purpose of this chapter is to teach mothers the secrets of setting boundaries and rules that don’t cause a revolt. The author describes a boundary setting designed to encourage and cultivate the family’s full potential rather than constrict it.

In secret five the author explains that the most successful mothers design their young men’s life to include confidence building experiences. Secret five gives the reader an understanding of exactly how to cultivate a self-confident independent young leader out of their young man.

The sixth secret of extremely successful mothers is their ability to create a family vision the drives each member to succeed as individuals and as a team. In this chapter the author unveils the secrets the most successful families have used through history to fortify their family’s position.

This chapter details the crowning secret of the most successful mothers—maintaining the transformation and progress. This chapter emphasizes the importance of endurance and provides the reader with a full picture of what their family can look forward to. The author explains the five guidelines one must utilize to maintain forward movement.

The Seven Secrets of Extremely Successful Mothers, when applied, can produce tremendous improvements in the lives of the reader and their family. Any mother will quickly realize The Dream Team Concept described in the book can create a tremendous life-altering enhancement in their family, whether they are a single parent or not.

Cederick Tardy is best described as an adventure seeking entrepreneur with a civic consciousness. He is the author of four books. His first two books, The Big Payback and A Head Start, were released in 2007. After being featured in Black Enterprise Magazine in November 2007, several national and local newspapers, magazines, television and radio programs, The Big Payback reached #5 on Amazon.com’s ranking for single parenting books. His most recent two books, The Seven Secrets of Highly Successful Mothers and A Flying Start: Outta This World Advice for Young Men, were released in 2012.

Cederick W. Tardy II is the founder of the S.T.R.O.N.G. Association, an organization focused on Strengthening, Training, and Redefining Our Next Generation of young leaders. The organization does this through social awareness initiatives, educational materials, and events focused on building strong families. He is also the president of Cederick Tardy Enterprises LLC, a company dedicated to creating information products that teach mothers to raise men and boys to become leaders.

From 2009-2012, Cederick served in the United States Army as a Quartermaster (Logistics) officer in the 36th Engineering Brigade in Fort Hood, Texas. From 2003-2007, Cederick served in the United States Navy as a Military Police Officer on board the USS Peleliu. He has deployed three times in service of Operations Iraqi and Enduring Freedom. Cederick holds a bachelor’s degree in finance. In addition, he has earned three certificates in Six Sigma from Villanova University.

Cederick’s hobbies include a wide range of activities from the mundane such as hiking and fishing, to more extreme such as shipwreck diving. He believes having the opportunity to travel with the military and personally has given him a unique outlook on life. , Cederick uses experiences gained from spending 6-8 months at a time sailing the world with the Navy and a year on the ground in Kandahar, to backpacking through counties such as Mexico, Thailand, and Argentina to provide a well-rounded opinion throughout his writings.

Cederick’s goals include traveling the world for one year in 2015 to study global logistical supply chain issues impeding economic expansion and growing the S.T.R.O.N.G. Association into a nationally recognized humanitarian assistance organization.

You have subscribed to alerts for Cederick Tardy II.

You have been added to Cederick Tardy II's favorite list.

You can also sign-up to receive email notifications whenever Cederick Tardy II releases a new book.