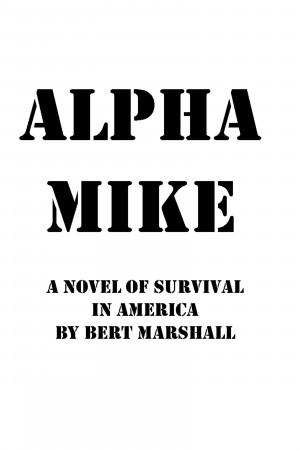 Rated 4.00/5 based on 4 reviews
Alpha Mike One follows a common man, David Perkins, through a post-apocalyptic United States after a series of events plunge the country into total anarchy. Perkins forms a small clan of fighters made up mostly of women with military experience. This is book one of a series. More
In a post-apocalyptic United States David Perkins, a common man with an Air Force warehouseman background is plunged into a lawless environment fraught with danger. His only option is to surrender to the aggressors, or fight back and over time he forms bonds with the only available people he can find who are not being packaged and sent north - women.

Collectively, they live off the land and begin staging militant rescues of other prisoners and escapees. 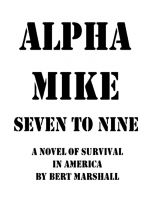 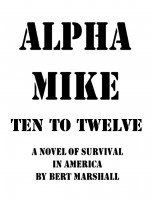 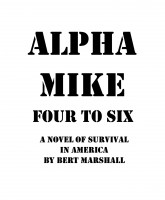 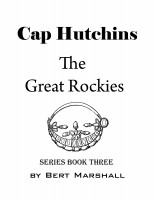 As others before me, I wasn't sure what to expect. I know the author personally and when he asked me to read & review I agreed, because I like to read and was interested to see what this was all about.

It took me a little bit to get into the story, but once I did I couldn't stop reading. The action was almost non-stop and although it wasn't too clear as for what had caused the onslaught of the Sickness (as it is called) the story line was pretty interesting. Until about halfway I got a little hung up in the repetition of the different 'adventures' of David Perkins & his Clan. Not until the moment they get in touch with the 'outside' world again did I start picking up the pace reading again.

I'm interested in learning what happens to DP in part two, but am not sure whether to buy the book or not (I probably will), since the abundance of sex was a little too much for me (no matter what the circumstances, I can't imagine someone having this much sexual relations in such a short span of his life...).

All in all I will say this is a great effort for a first novel and have to take my hat off for the effort that has been put into it.

I am not sure what I expected. I am not a war apocalypse kind of reader. I did however really get into this book. I am concerned for the main character, David. At some point his manhood may fall off. I was a little pissed at how the book ended. I have so many questions now. I am downloading the next part ASAP.

I like the whole Alpha Mike trilogy but think the author should finish. give some closer to David and the United States. would recomend these books. My only criticism is there was to much repeat of the back story.

I opened this book with some trepidation, this is not my usual fare when reading. I knew it would contain graphic descriptions of a World gone bad, terribly wrong and bad. From the onset of the biological weapon that wreaks havoc and death across the Earth, to the startling conclusion, this book is about survival: any way possible. Nothing is familiar except the landscape, every thing else has altered and for the worst. This is the American nightmare: nothing is reliable, orderly, predetermined or romantic. The Enemy has overrun the United States and few Americans have survived the killing Sickness only to be enslaved or simply done away with as worthless and burdensome. Through some lucky fluke, David Perkins, basically the guy next door, has found himself alive if not well. With standard training from a stint in the Air Force, he managed not only to remain alive but to collect and train a cadre of women in military efficiency and survival skills. They become guerilla fighters and saboteurs of such skill that the name Alpha One Team is spoken in the councils of resistance fighters with awe and respect, a hero to emulate and with luck, to bring in to connect with the organized forces that remain, a piece-meal coalition of State Militia and Federal troops.
This book captured me from the very start, within a short while I was gripping the edge of my chair, eyes flying across the page to keep up with the fast moving action, this book races. Your heart races and your breathing accelerates, your attention becomes focused and you jump at the smallest sound! I stayed up way past time to sleep because I couldn't let it go, it was a need to know situation. Oddly enough, the story followed me the next day, turning over possibilities and probabilities in my head until I was able to get back into the action. You run to keep up with this American Hero, he won't wait for you to catch your breath. He has the toughest, yet quite vulnerable, group of women warriors I have ever seen assembled, willing to risk the lives for their freedom and their cause. And, of course, for the intelligent and dedicated man who leads them.
A small note here for those with sensitive feelings, nothing and no is spared in their pursuit of victory over the invaders. Their language is down-to-earth and raw. The sex is frequent and stirring, there is little if anything held back. This is a frightening tale, the story line so plausible you find yourself casting a more discerning eye at the World Events on the nightly news. Moreover, it speaks of a man who ideals are so strong, so impeccable, you ask yourself, could I do this? Would I do this? Having read only Book 1 of the Alpha Mike One trilogy, I'm more than ready to take on Book 2, Alpha Mike - 4 to 6. This is not a book for those with tender sensibilities or for those not of adult age. But if you enjoy reading about the possibilities of a Post-Apocalyptic World, this book will ensnare you and keep you captive until the last deal goes down.

You have subscribed to Smashwords Alerts new release notifications for Bert Marshall.