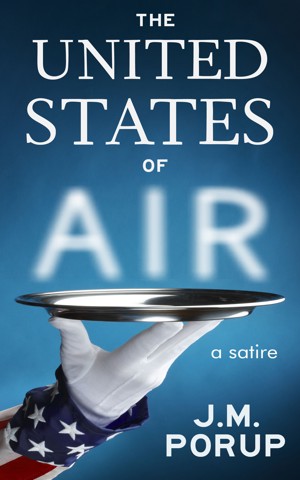 The United States of Air: a Satire

By J.M.
Rated 5.00/5 based on 2 reviews
Food Enforcement Agent Jason Frolick believes in America. He believes in eating air. As part of the Global War on Fat, he puts food terrorists in Fat Camp. When a pizza dealer gets whacked across the street from the Thin House, the Prophet Jones himself asks Frolick to investigate. But what Frolick finds out shakes his faith. Will he ever be able to eat air again? More
The National Sewer Agency is spying on people's toilets, looking for food terrorists...

Food Enforcement Agent Jason Frolick believes in America. He believes in eating air. He struggles to get the food monkey off his back. As part of the Global War on Fat, his job is to put food terrorists in Fat Camp.

When a pizza dealer gets whacked in the park across the street from the Thin House, the Prophet Jones himself asks Frolick to investigate. For the first time ever, Frolick solves a murder -- but what he finds out shakes his faith.

(I took care to give no obvious spoilers about the story)

Title: The United States of Air: A satire that mocks the war on terror (on Librarything: http://www.librarything.nl/work/6012)
Author: J.M. Porup
Language: English
Series: no
Format: e-book
Pages: 141
Publisher: Smashwords-published
Year published: original 2012, my edition 2012
ISBN number: 9780988006959
Topic of the book:
Reason for reading: I got it from the Librarything Member Giveaway programme.
Recommended: Not really.

Summary from the Smashwords site:
Food Enforcement Agent Jason Frolick believes in America. He believes in eating air. He struggles to get the food monkey off his back. As part of the Global War on Fat, his job is to put food terrorists in Fat Camp.

When a pizza dealer gets whacked in the park across the street from the Thin House, the Prophet Jones himself asks Frolick to investigate. For the first time ever, Frolick solves a murder -- but what he finds out shakes his faith.

Will he ever be able to eat air again?

First paragraph:
Look at how fat I am. Isn’t it disgusting? Here. Let me pull up my shirt. See? Zoom in that camera. Can all of you see? How much fat I can pinch? And don’t you go telling me that’s loose skin. Just because I have an eighteen-inch waist doesn’t mean I’m not fat. I know what fat looks like. It’s my job. Or used to be. Before I became ambassador to France, I was plain old Jason Frolick, Special Agent for the ATFF.
That’s the Bureau of Alcohol, Tobacco, Firearms and Food, for all you ferrners out there watching. It was my job to put food terrists in Fat Camp. And the kinds of fat I saw! A reminder every day why the Global War on Fat is so important. Thank the Prophet for the Amendment. No, not that Prophet. I mean President Jones. We all call him the Prophet. If it weren’t for him, our country would still be enslaved to addictive caloric substances, otherwise known in ghetto street lingo as “food.”

Review:
Story:
Maybe it's because I'm not American, but I thought it wasn't so much a "satire on the war on terror", but more a satire on dieting and views on obesity and anorexia. Of course that's much more literal, as the idea of the story is that there's a Prophet who came to leading the country, saying everyone should eat air, that everyone was addicted to food and that you could only be free when you ate air. The main character, who narrates the story, is a police officer who firmly believes in what the Prophet says - as a result, he hasn't really been eating anything for three years. And then he is surprised that people who do eat food, the "food terrists", have "enhanced abilities" because of that "food-drug". He does drink water, though.
It was a weird story. As a reader, you know that it's impossible to survive without food. I think the narrator would have died a lot sooner, actually, because he didn't eat all the necessary things to stay alive.
It also didn't end like I expected. I... don't think I like the ending. But if it's a satire on the war on terror, the author probably made it "end" in a similar way (as in, it hasn't ended yet...).

Also, an important role was played by a certain kind of candy called "Twinkies". I read half of the book before I finally decided to look up what Twinkies actually are XD Wikipedia knows: sponge cakes with creamy (banana-flavoured) filling (http://en.wikipedia.org/wiki/Twinkies).

Writing style:
The first half of the book was filled with a lot of candy names I was unfamiliar with, so it took me quite a while to read that. Halfway through, the narrator starts doubting and that's when the story gets interesting. As this was an e-book and I need to read it on my computer, I quite often forgot to continue reading because I didn't see the book with a bookmark on my shelf (that's not really the case with physical books :P) and it wasn't that interesting that I wanted to continue reading (well, until the last 40 pages or something XD).
It's written as if it's told.

Spelling errors/typos:
On page 69 in the sentence "Like the password to my hotmail account.” I think "hotmail" should be capitalized, as it is a name (or is it already present, uncapitalized, in the English dictionary?).
On page 79, "bewingèd pastries" could just be "bewinged pastries", without the accent (why is the accent there?).
On page 113, Fatso already says "Frolick" but he shouldn't say that until page 117, where he says "Froleek".

Conclusion:
It did make me think about the nonsense people can believe in and how they get to believe that. And yes, not eating and vomiting out your food because eating is unhealthy, that's nonsense.
It was an interesting concept, but the story should have been shorter. The first half was too long and there were way too many American candy names in it (which is not interesting at all for international readers).

Rereadability:
I'm not going to reread this book.

Related links:
When I saw the title "satire" I thought of the book "2002: een toekomstbeeld" by Esther Vilar, which is the kind of satire I had expected (the original of "2002" is German, but I can't look up the German title at the moment as I don't have the book nearby and the internet does not know, but I think it's "Die Fünf-Stunden-Gesellschaft. Argumente für eine Utopie" as my Dutch edition says the German publication date was 1981 and it's about a 5-hour working week). I also thought of a book I had read on what can really happen when you don't eat, "Mijn allerliefste vijand" by Milou van der Horst (Dutch book, but I wrote about it in English here: http://moonplanet.dreamwidth.org/55438.html). Both are better books than this one, I think...

Definitely worth the read. This book keeps your interest as you turn the pages. Enjoy!

a must read! Occupy Wall Street, Wikileaks, NSA spying, it's all there, baby!

You have subscribed to alerts for J.M..

You can also sign-up to receive email notifications whenever J.M. releases a new book.