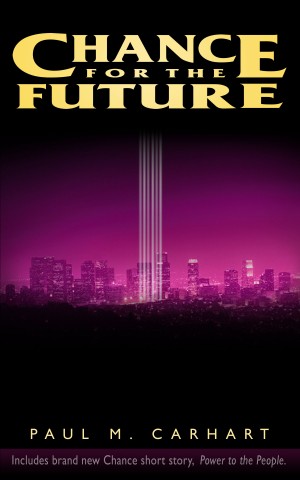 Chance for the Future

Paul M. Carhart is an award-winning Art Director in print, Internet and new media. He has produced interactive creative for Audi, Nissan/Infiniti, Toshiba and Focus on the Family and was the host of the UCCS web radio show, The Creative Underground. He often speaks on creativity, writing and design and his articles have appeared online and in local and national print publications. In addition to the Fairlight series of science fiction novels that include Chance for the Future, Hope for Tomorrow and Faith in the Past, Carhart is also the author of One of the Girls (the first in the PsyChick™ series of Young Adult superhero novels), A Stranger on Bay Street (the first in his new Worlds Collide series) and Zooming Thru Life, a nonfiction guide to the on-the-go lifestyle. He is currently halfway through the next Worlds Collide novel, A Stranger at the Gallows. And hopes to return to the Fairlight series after that. Stay up-to-date: www.paulcarhart.com.

After a short time in Colorado, Paul and his wife Lori returned to Long Beach, California where they both grew up. The two of them were the driving force behind Launch Pad, a band that played the local Long Beach music scene as well as many charity functions.

In Febuary 2014, four days before her birthday, Lori passed away, the results of a devastating stroke. Her death put Planetfall and subsequent books roughly a year behind schedule.

Paul has continued their music in a new band, Third World Sun, made up of former Launch Pad members. They play frequently in the downtown Long Beach music scene and their first independently-produced CD will be available in December, 2015.

Paul has one daughter, Melody, who is Third World Sun’s primary photographer.

Reviews of Chance for the Future by Paul M. Carhart

You have subscribed to alerts for Paul M. Carhart.

You have been added to Paul M. Carhart's favorite list.

You can also sign-up to receive email notifications whenever Paul M. Carhart releases a new book.