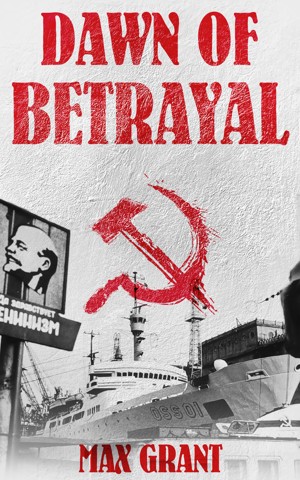 By Max Grant
On an open-ended assignment for one of Hollywood’s mainline studios Raymond James, private investigator, and his partner Miss Suzuki develop an understanding of the communist conspiracy plaguing America. Her experiences lead Miss Suzuki to predict the future capture of our country through promotion of a cult-of-personality figurehead fronting for a shadowy cabal of entrenched domestic enemies. More
It’s 1947 in America. Enemies foreign and domestic working under explicit orders in service to the Soviet Union have infiltrated virtually every institution. In these times free Americans have not yet succumbed to the doctrines and deceits of political correctness. Engrained with common sense and rational thought, they could never foresee that so many would someday yield to such blatant manipulation after only a few decades of indoctrination and conditioning.
Yet one among them does.
Newly returned from the Pacific War and Japanese occupation, private detective Raymond James hangs out his shingle in Hollywood, hires on Miss Yuki Suzuki, ex-internee of Manzanar, and works his way onto the studio lots. Neither expects that an unusual assignment will plunge them deep into the heart of darkness of the American communist conspiracy. What starts as a simple case of mistaken identity grows into a cross-country odyssey of treason, murder, duty, honor, and courage before just one communist plot is discovered and run to ground.
Join Ray as his adventures take him from the docks of Los Angeles Harbor through the studios of Hollywood and the defense industries of New Mexico to a nest of vipers hidden deep in the high society of Tampa-St. Petersburg. Obtain glimpses of the moral dangers inherent in an alien, inhuman system that brooks no dissent and relentlessly enforces its tenets by any means necessary. Share the vision of Ray’s partner Yuki who understands better than any what the future holds.
Download: epub mobi (Kindle) pdf more Online Reader
rtf lrf pdb txt
Price: Free! USD
Add to Library
Create Widget
Tags: hollywood detective communism ussr treason huac betrayal of america reds cpusa
About Max Grant

A child of the Cold War, Max Grant departed eastern Canada at an early age for an all-American upbringing in Vermont and points south. His first exposure to geopolitical realities occurred when the town fathers, in response to the ongoing Cuban Missile Crisis, passed out red-filtered flashlights for use by children trick-or-treating on Halloween.

Max became an avid reader of World War II and Korean War accounts during his school years in upstate New York, where he learned to duck and cover to survive nuclear attack. At age 14, on a family vacation to England, he came face to face for the first time with real live Communists, a group of Chinese diplomats in identical Mao suits out for an afternoon stroll.

Ever curious about the land of his origin, Max returned to Canada’s Maritime Provinces to pursue his undergraduate studies, majoring in the environmental sciences. Intrigued by his new cultural experiences Max pursued graduate studies, in French, under the guidance of a cadre of Quebec separatists.

Based in Washington DC, his consulting career saw Max travel for work to 49 of the 50 US states. Max has spent the past six years in the long shadow of the DMZ enjoying the wonderful people, culture and economic miracle that are the Republic of Korea.

Early one February morning in 2004 Max awoke from a dream and went to his computer to type in the first page of Dawn of Betrayal. Unfortunately, this had him starting the story somewhat near to the end and Max had to figure out a way to make that work. Initially conceived as a parody of the hard-boiled 1940s detective story, six years of plot development and continual integration of new ideas and contemporary concerns resulted in a historical period piece that is a contribution to the sparse world of fictional anti-communist literature.

You have subscribed to alerts for Max Grant.

You have been added to Max Grant's favorite list.

You can also sign-up to receive email notifications whenever Max Grant releases a new book.