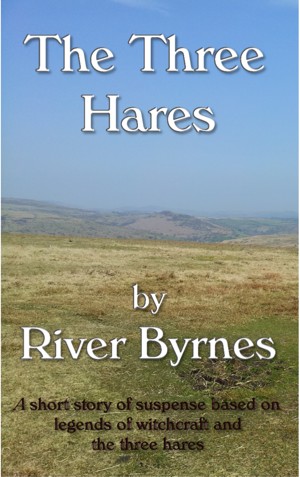 The Three Hares (a short story)

A short story based on witchcraft and legends of the three hares.

As a child, I used to write a lot of poetry, to help me express my feelings.
In my early twenties, after seeing a programme on television, a friend and I thought 'we can do that', and we soon after found ourselves spending a month hitchhiking in Wales, talking to the people, visiting places, and in the process collecting local paranormal stories, and even putting one to the challenge by spending a night on top of Cadair Idris (by doing that, we were supposed to go mad; I don't think we did, but some might dispute that!). I put all that information together as a book, though I never did try to publish it. When a Canadian friend saw it, she told me that I could have used it to pass a graduate course, she thought it was that good! Obviously, I was chuffed with that.

Child rearing and life in general stopped me from writing for some time, till my kids were a bit older and I found myself spending night after night writing my first children's book, THE HOUSE. I sent it off to a publisher, got a rejection, and then more or less forgot about it.

A few more years passed, and I began to think of taking up writing again. A few short stories emerged, and I started doing a Creative Writing course. This course made me look at my writing more seriously and I joined a local writer's group. I also started another children's book, TRISTAN, got stuck on that for a while, and then ended up writing several short stories.

The Three Hares was one that I had started at the writer's group, finished off at home and then sent off to a competition - the one and only I have ever sent off. And though it didn't win, it did get a Highly Commended.
After that, more short stories emerged.

It is my plan to put several of these up for sale via Smashwords, write some more and to also to get back to TRISTAN and finish it.

As an old and bold Dartmoor hand I was very pleasantly surprised by this creepy tale.
With just a few words River caught that eerie feeling that you sometimes get on the Moor as darkness falls.
I felt a wee, well remembered, shiver.
I will definitely be more circumspect of moor hares in future and as for any shallow depressions on the ground - they will be given the widest of berths.
I thoroughly enjoyed the story.

A short story that has been well written and is very atmospheric. It’s easy to feel yourself being drawn along by the hares as Dylan was and the surprise ending sends a shiver up the spine. I’d be happy to purchase other works by this author. Recommended reading.

Wow! This is a little bit creepy. I live near Dartmoor in the United Kingdom and I'm not sure I want to go up on the moor alone again after reading this.

The author holds you gripped all the way through and even in so few words, I feel like I know the main character.

I thoroughly enjoyed this and greatly recommend it to anyone interested paranormal or spokey stories.

You have subscribed to alerts for River Byrnes.

You have been added to River Byrnes's favorite list.

You can also sign-up to receive email notifications whenever River Byrnes releases a new book.