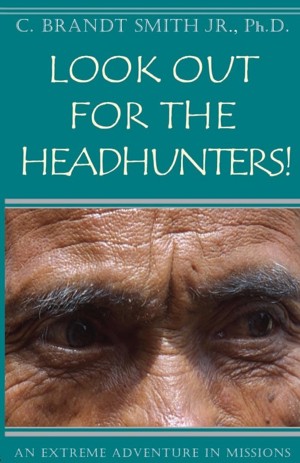 Look Out For The Headhunters

By Dr. C. Brandt Smith, Jr.
Look Out For The Headhunters!

“Look Out For The Headhunters!” details the struggles and victories of taking the Gospel into the forbidden terrain of an unreached people group. Restricted access nations have long challenged the imagination of missionaries, but access is possible. More
Seventy years of Communism and impenetrable border crossings coupled with range after range of mountains prevented missionaries from entering Kawa villages. However, in 1998 a missionary family prayerfully and strategically moved into the dark border areas of China and Burma with the Gospel and a passion to share Christ.

Read these stories of faith and the making of a missionary passionately seeking a lost and spiritually hungry minority people. Readers will sense the urgency of message and the blessings and favor of God on his life and the Kawa people.

“Look Out For The Headhunters!” presents the challenges and struggles of a missionary called to take the Gospel message to a remote and forgotten people—The Kawa. Your heart will be stirred as you read the incredible stories of danger and triumph as the messenger and message penetrate this isolated people known for their headhunting practices along the Burma-China border.

Are you a home school family? Or, a mission leader? This book will bless all who read the amazing journey and commitment to reach a remote people with the Gospel.

Bio: C. Brandt Smith, Jr., Ph.D.
Dr. Brandt Smith is a Leadership Specialist and Social Scientist with 20+ years of experience in Iraq, Taiwan, Thailand, China and Myanmar (Burma). Most recently, Dr. Smith completed his second tour of duty as a Department of Army Civilian in Iraq where he embedded with the U.S. Army. 5 ½ years in Iraq had him traveling the entire country connecting with Kurds, Sunnis and Shi’a interviewing hundreds of Iraqi nationals nationwide. From 2006-2008 he served as director of a non-government organization (NGO) and later as a Human Terrain System, Social Scientist in eight southern Iraqi provinces.
During this time in Iraq, Dr. Smith successfully steered numerous projects for the U.S. State Department, Office of Cultural Affairs, established English Second Language schools and provided business training for the Iraqi Ministry of Trade, Iraqna (Zain) Telecommunications Company and supervised Western and local national employees during the violent days of the U.S. Military Surge.
Dr. Smith was presented with numerous citations, medals and awards for his work in Iraq. These include an honorary Bronze Star, the Superior Civilian Service Award, the Global War on Terror Medal and the Commander’s Civilian Service Medal to name a few.
Dr. Smith’s seminal research work conducted in Iraq, “The Effects of Current Leadership Models in a Post-Saddam Iraq” was completed on the ground in southern Iraq during the final days of Operation Iraqi Freedom. Dr. Smith’s research yields knowledge into the thinking of average Iraqis and what they want from their government—what they are thinking and why there is so much anger in post-war Iraq.
Dr. Smith began his career in “field studies” in 1979 on the Philippine island of Mindanao as a twenty year old student. Since then, he lived and worked in some of the most challenging and hostile environments known to man. In the late 90’s he lived alongside the “Wild Wa” of China and Burma. The “Wild Wa”, former head hunters and producers of raw opium know him as “Lao Bing”—Old Soldier and call him friend. His ability to speak numerous languages coupled with his ready survival wit allowed entry and exit with ease into cultures most researchers avoid.
Dr. Smith received his Ph.D. in Organization and Management with a Specialization in Leadership from Capella University in January 2011. In 1996, he earned a M.A. in Memphis, Tennessee in Religion and Education from MABTS. Dr. Smith finished his B.A. in Behavioral Sciences in 1989 from National Louis University.
Secure the services of Dr. Brandt Smith for your consulting, advising and keynote speaker needs. Dr. Brandt Smith can be reached by calling 870-351-7459. Contact may also be made by clicking the link at www.brandtsmithconsulting.com for more information.

You have subscribed to alerts for Dr. C. Brandt Smith, Jr..

Would you like to favorite Dr. C. Brandt Smith, Jr.?

You have been added to Dr. C. Brandt Smith, Jr.'s favorite list.