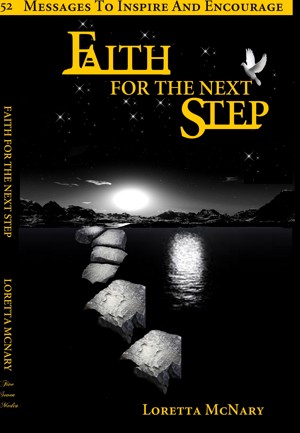 Faith for the Next Step

By Loretta McNary
Faith for the Next Step is a compilation of 52 inspirational messages told by McNary as she recalls her responses to life’s continuous journey through lessons of pain and loss, lacking, self-doubt and self-imposed limitations. “I put a tremendous amount of time, attention, and emotion into the pages of this book,” says McNary. “I wanted my communication to be meaningful, insightful and relevant. More
Faith for the Next Step, 52 Messages to Inspire and Encourage is a book about the life-changing lessons I learned from the pain of loss, lack, self-doubt and self-imposed limitations. Since these lessons also helped strengthen my faith, I wanted to share how my struggles with trust, faith, joy, forgiveness, finances, confidence, love, family, strength, wisdom, and patience gave me courage to question the reason for my life. That question led me to seeking more of God’s word, and ultimately I found me. Not the hurt, unforgiving me, but the greater me, I was created to become. So as you read Faith for the Next Step, I pray that you too will find your greater self and share your lessons learned to inspire and encourage others to do the same.

Loretta McNary is an accomplished television talk show host, a highly requested empowerment speaker, business consultant, advocate and philanthropist. She has been in the communication and broadcasting industries for more than 15 years. She has hosted several popular TV and radio talk shows, and is currently the host and executive producer of “The Loretta McNary Show”. She is also a host for “On Cable Tonite,” a TV talk show broadcast on Comcast Channel 17. Her mission is to inspire, motivate and encourage as many people—especially our youth—to live joyful, well-balanced and productive lives.

Loretta is the founder of PINK EAGLES Inc., a non-profit leadership development, social etiquette and training organization for girls. PINK EAGLES has been adopted by the Shelby County Sheriff’s Office. She is the former project coordinator for the Infant Mortality Public Awareness Campaign of Tennessee (IMPACT) – a Girls Inc. Memphis project led by teens.

This year, Loretta appeared on the Red Carpet in Beverly Hills interviewing academy award winning actors at the s Night of 100 Stars Oscar’ viewing event. Her show also covered the Oscar Setups at Hollywood’s Kodak Theatre and the “Show Me Music & Art Fest” featuring the hottest performers in country music. Four of her absolute favorite interviews are the one-on-one interview with the talented Mr. Denzel Washington, and her interviews with Ed Asner, Loretta Devine, and Gloria Allred.

Loretta was selected as one of this year’s 50 Women of Excellence 2011, nominated as a 2011 Children’s Champion, and received MIFA’s “Something Good in Memphis” Award. She recently received a proclamation from U.S. Congressman Steve Cohen for her work in broadcasting and her community service. McNary also received an award from the National Business College for her work with their students who are majoring in business.

McNary knows that all these opportunities have been gift from God, and of all of the amazing things she gets to do daily, her favorite job is being a loving mother to her five wonderful sons. She is very active in her children’s school and social lives and is active in her church. Her favorite mantra is, “Success comes to me because I live and operate in a ‘No Excuse Zone’ and I lead by helping others first.” Leading by example, McNary believes that to be a great leader, one must first learn to serve with humility and empathy.

You have subscribed to alerts for Loretta McNary.

You have been added to Loretta McNary's favorite list.

You can also sign-up to receive email notifications whenever Loretta McNary releases a new book.