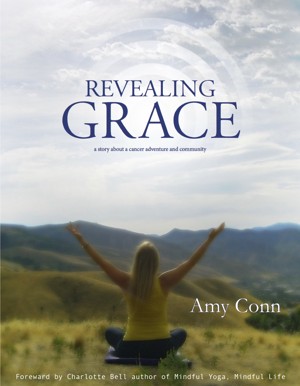 Revealing Grace: A Story About a Cancer Adventure and a Community

By Amy Conn
Written by cancer survivor and yoga instructor Amy Conn, this wise and compassionate field guide inspires those touched by cancer to live more fully and less fearful during times that appear most challenging. More
The secret of cancer is to not feed it, not give it any recognition beyond what is necessary, and not give it attention. Rather, love the working, healthy parts of the body. Love the parts that are nourishing and life giving. Self-acceptance begins with the self.

Revealing Grace: A Story About a Cancer Adventure and a Community began as a memoir but rapidly expanded to a fantastic adventure of personal, physical and political insights. The scope of survivorship extended far beyond Amy's own experience broadening to an entire community of survivors including the astounding world promise that cancer death and cancer suffering will end by 2015. What is the recipe for surviving and surpassing cancer? Amy Conn has a few ideas that The American Cancer Society are incorporating, shedding new insights to cancer recovery for self, family, community and the whole world.

Written by cancer survivor and yoga instructor Amy Conn, this wise and compassionate field guide inspires those touched by cancer to live more fully and less fearful during times that appear most challenging. Conn’s is the first book to navigate the whole cancer experience. Revealing Grace offers practical ways to health body, mind and spirit; from evasive radiation and chemotherapy treatments to ways of including loved ones in this profound evolving healing practice. A poignant story that blends a personal cancer awakening with a mission to develop a Non-Profit Organization: Quality of Life Yoga Program designed to support not just the individual, but also the entire family towards self-healing. This book and non-profit organization are Conn’s contribution to fulfilling this powerful world promise.

In April 2005, The Salt Lake Tribune featured Amy Conn on the front page of the Sport’s section, Running through Adversity: “Amy Conn will run the Salt Lake City Marathon four days before undergoing chemotherapy and one month following a lumpectomy.” This story echoed the tenacity of the woman behind the article.
In 2006, after a year of completing her own regiment of chemotherapy and radiation treatments, Amy began the program Quality of Life: Yoga for Survivors, Caregivers, Loved Ones; a free class for people who desired a healing program that would extend beyond the doctor’s appointments. Her first class had twenty-two participants! Rolf Gates, internationally renowned yoga teacher and author, contributed books and taught meditation courses for Amy’s students.
From 2007-2010, the American Cancer Society-Cancer Action Network (ACS-CAN) collaborated with Amy on two fundraising events per year raising over $20,500 for ACS-CAN with her Quality of Life students. In 2007 and 2008, ACS-CAN flew Amy and her family to Washington, DC to lobby for rights on behalf of the cancer survivor. She met with each senator and congressman representing Utah and asked each of them to sign the bill at hand (we were lobbying for ‘enabling un-insured women to receive mammograms’ which passed).
In the Fall of 2008, The Catalyst Magazine featured the Quality of Life yoga program describing the benefits of yoga. “Fear can be a chronic emotion for those dealing with cancer: fear of the treatment process, the outcome, and even recurrence,” Conn states. “Practicing yoga in a setting like Quality of Life brings a student face to face with that fear and gives them tools to move past it.”
In 2009, Dr. Mikelle D. Moore, LDS Hospital’s Administrator and CEO wrote an article for the hospital about Amy’s story titled, Cancer Team Gets Runner Back on the Road-Personalized Care Positive Attitude Were Key. “One of the big challenges with breast cancer is the amazing number of doctor appointments you’re required to have. Your life has to be able to work around it because it is all set in stone. Suddenly, your job is having appointments.” Conn recalls those early days of discovery and diagnosis. Amy’s team of doctors helped make sense of it all; they helped her hold all that together. “There was no way I could have fallen through the cracks. I was immediately put in the system and felt like I was guided from one perfect doctor to the next.”
She is currently in a PhD program at the University of Utah in the College of Health dept. of Exercise and Sport Science-Special PE researching the benefits of yoga on special populations; specifically cancer survivors. She privately tutors children in all academic areas. Amy is also a Nationally ERYT500-RYT500 hours Registered Yoga Instructor. A teacher her whole life, Amy teaches yoga in two afterschool programs: Rowland Hall (a college prepatory school) and the Open Classroom (a charter school). Amy is the Director and a weekly yoga instructor for A Quality Life Community, her non-profit.
Amy lives in Salt Lake City, Utah, with her husband, Firefighter/Paramedic Michael Conn, and their two children Benjamin (age 15) and Abigail (age 12) and their two dogs Mazzie and Scrappy. Amy finds respite from her active life in the mountains surrounding her home. Almost every weekend, Amy can be seen hiking with her dogs up a mountain trail stopping at the top for a brief meditation.

You have subscribed to alerts for Amy Conn.

You have been added to Amy Conn's favorite list.

You can also sign-up to receive email notifications whenever Amy Conn releases a new book.