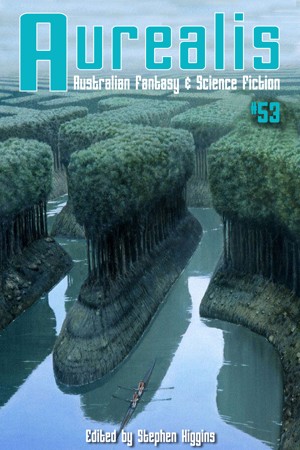 Issue #53 is the August 2012 issue of the Aurealis magazine, a monthly magazine showcasing Australian speculative fiction and with an emphasis on Australian content and news. This edition was edited by Scott Vandervalk and Stephen Higgins.

Stephen Higgins wrote this month's editorial, focusing on the demographics of speculative fiction readers, in particular electronic publications like Aurealis.

The Karma Tree by Benjamin Allmon is a slightly disturbing story about the dangers of making fun of teddy bears. The protagonist lives in a share house, and Allmon does a fantastic job making the characters come alive in a short story. The writing blended humour with disturbing images well.

Nightsider by Richard Kerslake tells the story of Shana Bron, an immigration officer on the daylight side of a world tidally locked with one hemisphere in perpetual sunlight and one always shrouded in darkness. Bron struggles with the demands of her life as she hangs onto the edge of the "haves" society, while dreaming of seeing the stars. An enjoyable story, more character driven but with enough of a plot to keep the reader interested. It was an interesting world portrayed - well worth the read.

This month's edition contained an XTREME SCIENCE article, titled To Infinity - And Beyond! by Patricia L. O'Neill, which describes some of the history behind what went onto the Voyager spacecraft. A series of human foibles and unusual circumstances dictated which pictures, sounds and information were stored on the craft in case alien civilisations ever come across them. It was a very interesting read.

As always Carissa's Weblog provides a round up of some of the more interesting articles around on the web in the area of Australian speculative fiction, mostly in the form of audio interviews and video. There were also significant number of reviews of both books, TV series, movies and Rob Parnell pens a love letter to Joss Whedon.

Robert N Stephenson draws parallels between the current debate in Australia on asylum seekers who arrive in our country by boat and some of the "alien invasion" style sci-fi from the 1950s in the regular Rob's Rants and Raves column.

Well worth the read.

You have subscribed to alerts for Stephen Higgins (Editor).

You have been added to Stephen Higgins (Editor)'s favorite list.

You can also sign-up to receive email notifications whenever Stephen Higgins (Editor) releases a new book.