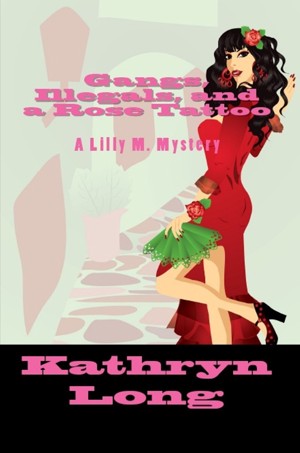 Gangs, Illegals, and a Rose Tattoo - a Lilly M. Mystery

By Kathryn Long
Lilly Millenovanovich is an over forty, struggling author, trying to make financial ends meet by working as a night school instructor, teaching English to immigrants, while freelancing during the day for the Barton Gazette. When one of her students is shot, life goes from boring to frighteningly exciting as Lilly is thrown into chaotic turmoil of murder and mystery. More
It's double the trouble, with tons more suspense, and steaming with lots of romance. The second novel in the Lilly M. Mystery series proves that Lilly Millenovanovich gets things done in the most entertaining, exciting, and often comical way.

Lilly Millenovanovich is an over forty, struggling author, trying to make financial ends meet by working as a night school instructor, teaching English to immigrants, while freelancing during the day for the Barton Gazette. When one of her students is shot, life goes from boring to frighteningly exciting as Lilly is thrown into chaotic turmoil of murder and mystery.

She begins making new friends; only they aren't all the nice kind. Diving into cultural waters, she can't refuse a heartfelt plea to help find a young Mexican boy, Luis Gallos, and reunite him with his mother. Of course, she will have to dodge the dangerous hands of the Mexican Mafia and it's ruthless but clever jefe, Carlos Ruido. Lilly finds her sleuthing will keep leading to the south side of town, appropriately named the Peligroso. It is home to many Hispanics, but also to the Mexican Mafia gangs and rampant crime. Barton authorities are preparing for the eventual showdown with the infamous Ruido, hoping to finally capture him. The only problem is who they're using for bait to lure him in. Luis Gallos, the crime leader's grandson.

If Lilly could just focus on helping to get Luis back together with his mother, her search might not be so frustrating. However, when the hot and handsome bad boy Latino, Nick Galina, pops into her life, Lilly's emotions kick into overdrive. She's hopelessly drawn to him, though it doesn't help that he might be working for the wrong side of the law. When Lilly finally decides she can handle her feelings and whatever Nick dishes out, another romantic ingredient is added to her life. Former fiancé, Jake Kline comes back into town.

The challenges are demanding and the dangers are increasing, but Lilly can depend on her cousin, Mona, as well as her crazy but loving team of aunts, Irene, Sadie, and Fran to lend a bit of help. The chase is on to save Luis before his grandfather can manage to dupe the authorities and steel Luis away. If all goes according to plan, Lilly and company are just the ones to accomplish the task and bring life a happy ending.

For more in this mystery series, read Whips, Cuffs, and Little Brown Boxes.

Kathryn Long is a native Ohioan, born and raised in Barberton, the "Magic City". She is the youngest of five children, although the closest sibling in age is a brother sixteen years her senior. Being raised like an only child, Kathryn found reading and writing as favorable forms of entertainment. In high school as a member of the Writers' Club, she continued to nurture her writing talent.

After high school Kathryn attended and graduated from the University of Akron with a BA degree in French. Before marriage and children the author managed a Waldenbooks store and continue writing short stories and song lyrics as a hobby. In 1987 she returned to school for a Bachelor's in Education. She has been an employee of the Green Local School system since 1990 and currently teaches SLD students at the high school.

Writing took a more serious turn a few years ago as Kathryn completed her first novel-length work and discovered that mystery was her nitch. Early on, determined to improve her craft, she developed a habit of spending most of her free time in the summer and on weekends during the school year, writing story after story. Mystery merged with the color of Native American culture to create Oklahoma's Gold and A Pleasant View. Venturing into cozy mysteries and romantic suspense writing, Kathryn has created three novels with the cozy, Whips, Cuffs, and Little Brown Boxes; a romantic suspense, A Deadly Deed Grows; and the recently completed, Dying to Dream, another romantic suspense.

Kathryn has also written short stories, two of which are published in The Piker Press: "A Good Man" and "Betrayal in a Letter". She also has ventured into the young adult genre, writing the modern-day fairytale, Cinderella Geek, under the pen name, K. Sean Jennkrist.

Keeping connected is an important element of writing. Staying in tune with what goes on in the writing world and being visible are reasons why Kathryn is a member of Sisters in Crime and maintains a blogsite - Writers & Teachers as well as a facebook page.

You have subscribed to alerts for Kathryn Long.

You have been added to Kathryn Long's favorite list.

You can also sign-up to receive email notifications whenever Kathryn Long releases a new book.