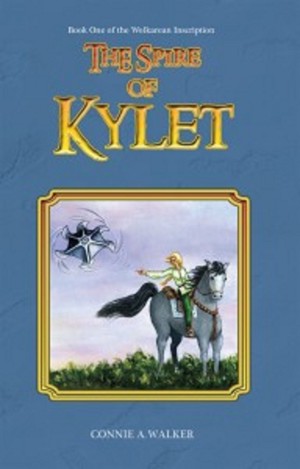 By Connie A. Walker
Katrine of Banur leaves her father's home to travel to the Recorder's School at Pardish, where she will train to be artist and scholar. But as her travels take her into danger after danger, she begins to feel more like a Warrior than an academic. She fears the change is caused by an ancient weapon, the magical spire of Kylet. Or perhaps the seeds of violence have always been inside her. More
Book 1 of Wolkarean Inscription

Katrine of Banur has a scheme to escape the tedious life of a herder, with its forced early marriage, that her father has planned for her.

Secretly she applies to the illustrious Recorder’s School in the city of Pardish, where only a few exceptional apprentices are accepted each year. But Katrine has been honing her artistic talents and believes she has all the qualifications necessary to become one of the Regent’s elite historian-couriers. She has saved almost enough money from what she earns working on the family ranch in order to pay for the caravan trip. Regardless of what her parents say, she intends to leave home as soon as she receives notification of her acceptance.

Shortly after Katrine finds a spire, a magical weapon created centuries earlier by the sorcerer Kylet, a series of strange events assail her. Because of an act of heroism, she is adopted by one of the mystical Crennese tribes, the Glainites, and is given powers she does not understand and cannot control. She has upheavals of emotion and peculiar sensations in her body. She is plagued by headaches and blurry vision and horrible nightmares.

She fears her dream of becoming a Recorder is doomed.

Then, unexpectedly, she finds herself on a journey to Pardish in the company of a Master Recorder, his new apprentice, her most despised cousin, and a legendary Warrior. As they travel across the countryside, Katrine is faced with unimaginable dangers and decisions. Before she reaches her destination, she faces death three times, redefining her understanding of the world and her place in it.

Connie A. Walker’s interest in fantasy developed before she started grade school. Her sister, June, who was five years older, practiced her reading skills by reading to Connie. June introduced her to The Wizard of Oz, Peter Pan, The Arabian Nights, Alice’s Adventures in Wonderland, and hundreds of fairy tales. Connie fell asleep every night with visions of elves and ogres, sorcerers and enchanted lands, flitting through her mind.

When her sister started junior high school, the reading sessions dwindled to a few times a week. Suddenly Connie had difficulty sleeping. She began having nightmares. She dreaded going to bed.

One night, when Connie was very tired and having difficulty falling asleep, she pretended that June was reading her favorite story to her. She drifted off to sleep and had pleasant dreams. After that, when she went to bed, she reviewed other tales she had heard, often embellishing the action and adding characters.

Within a short while, she was making up stories of her own. That was when she decided to become a writer.

When Connie was seven years old, she won an annual writing contest sponsored by her elementary school. Students in first, second and third grades were eligible to enter. She was the first first-grader ever to win. Her story, “Stop, Look, and Listen,” was about a dog who acted as a crossing guard.

Throughout elementary and high school, Connie made her homework assignments enjoyable by being creative. When doing research papers, she presented the facts within a fictional frame story or a play. Essays were often written as satires, ending with unexpected twists. Connie considered everything she wrote as a prelude to a career as an author.

While getting her Bachelor of Arts degree in theatre at Brigham Young University, she had four original plays produced: a one act comedy and a two act drama (both of which were contest winners), plus two musicals. Later, she had two other one act comedies produced. After graduation, she worked as a technical writer, a graphic artist, and a public relations specialist. In the evenings, she wrote short stories, plays, poetry, and outlined ideas for fantasy novels. She filled a filing cabinet with unpublished manuscripts. A single mother of two, Connie often found her writing time shunted aside by such things as chicken pox, science projects, strep throat, baseball games, stomach flu, and school activities—all those things associated with parenting.

In the meantime, she had to make a living.

As her children entered the teenage years, financial demands increased, and Connie felt the need to develop a career that provided a predictable and adequate income. She attended the University of Utah and earned a Bachelor of Science degree in psychology and a Master’s degree in social work. She has been employed as a foster care caseworker, a psychotherapist, and a clinical programs manager.

Now retired, she has finally found enough uninterrupted time to pursue her goal of becoming a professional writer. Her children’s book, Timmy and the K’nick K’nocker Ring, is a fantasy about a young boy who is transported to a world where his special talents are considered magic. It took first place in a local writer’s contest, Children’s Literature category, and was the grand prize winner as well.

The Spire of Kylet, a young adult fantasy, is the first book in The Wolkarean Inscription Trilogy. Katrine is a fifteen year old girl who thinks she has her life all planned out. But, after performing an act of heroisn, she is adopted into a tribe of wizards and receives their powers. Suddenly, she is thrust on a path toward a new destiny whether she likes it or not.

Connie is currently working on a second Wolkarean trilogy.

Learn more about Connie A. Walker

You have subscribed to alerts for Connie A. Walker.

You have been added to Connie A. Walker's favorite list.

You can also sign-up to receive email notifications whenever Connie A. Walker releases a new book.