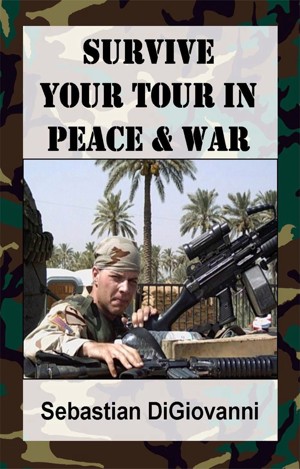 Survive Your Tour in Peace & War

By Sebastian DiGiovanni
This special report is an unofficial military guide crammed with valuable tips on how to adapt to military life, especially in combat zones. A must read for anyone thinking of enlisting in the military or who has recently joined up. DiGiovanni gives an enlightening view of the war in Iraq and on terrorism from an Iraq combat veteran’s viewpoint. Military history buffs will love this report. More
This unofficial military guide was written from the perspective of an Iraq combat infantryman’s viewpoint. It presents a unique view of the war on terrorism that many categories of readers will find fascinating and highly informative:

Those planning to enlist in any military branch with a unit likely to be deployed in a combat zone or recently enlisted in such a unit will find this unofficial military guide to be a treasure trove of tips that could prevent loss of pay grade, and maybe even their life.

Sebastian DiGiovanni has had an eclectic range of jobs:

Mortician’s assistant, radio personality, theme park coordinator, talk show host, newspaper reporter, strip club disc jockey, and ten years in the military with back-to-back tours in the combat theater of Iraq and a hardship tour in Korea. His duties in the service were infantry, military intelligence, mortars and recon.
He is a licensed hypnotist; also, licensed to “marry you and bury you.” Translation: he can perform weddings and preside over funeral services.

He lives in Arizona with his beautiful and talented partner Hydie and their three amazing kiddos.

Most of Sebastian’s writing stems from the odd career paths he’s chosen.

Works in progress include his debut fiction work, Anodes (pronounced A-nod-es) Diner, a collection of short stories reminiscent of Twilight Zone and Outer Limits; also, a novel, The Locket Diaries, a story of love and war set during the war in Iraq.

Reviews of Survive Your Tour in Peace & War by Sebastian DiGiovanni

You have subscribed to alerts for Sebastian DiGiovanni.

You have been added to Sebastian DiGiovanni's favorite list.

You can also sign-up to receive email notifications whenever Sebastian DiGiovanni releases a new book.